The Olympic Plaza, where the opening and closing ceremonies of the PyeongChang Winter Olympics and Paralympics will be held. [YONHAP] 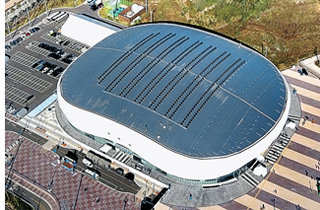 
In case of extreme weather conditions on the day of the opening ceremony of the 2018 PyeongChang Winter Olympics, the PyeongChang 2018 Olympic Winter Games and Paralympic Games Organizing Committee (Pocog) has chosen Gangneung Ice Arena as its Plan B.

“We chose Gangneung Ice Arena as our top pick, considering its location, transportation, total capacity and the arena’s ability to restore its ice promptly,” said a source from Gangwon Provincial Government on Dec. 22.

The Olympic Plaza, an oval-shaped building constructed to host the opening and closing ceremony of the PyeongChang Winter Olympics and the Paralympics, was built without a roof. The average temperature of Daegwallyeong, the region of Pyeongchang where the facility is located, in February ranges between -4 to -11.7 degrees Celsius (24.8 to 10.9 degrees Fahrenheit). With the wind, the temperature may feel as low as -30 degrees Celsius. As a result, those who have purchased tickets to watch the opening ceremony will have no choice but to be in freezing weather for more than five hours. 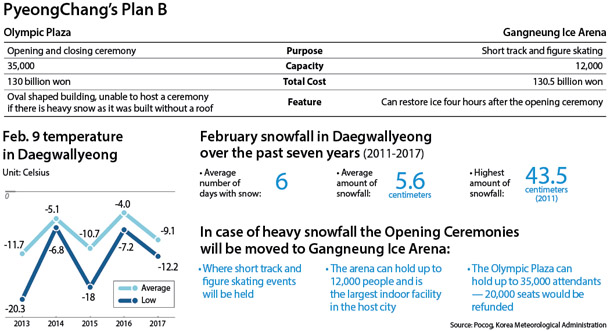 To make the plaza a little warmer, Pocog has begun installing an acrylic fence around the stadium to block the wind. The 350-meter (0.22-mile) fence will cover the lower part of the plaza. In addition, 40 heaters will be installed throughout the spectator seating area.

But these solutions won’t help much if there’s heavy snow on the day of the opening ceremony. Between 2011 and 2017, there have been an average of six days with heavy snow during the month of February. Pocog is mostly concerned with having to deal with heavy snowfall on the day of the ceremonies. On February 12, 2011, Daegwallyeong saw 43.5 centimeters (1.4 feet) of snow fall in a single day.

Though Gangneung Ice Arena can only hold up to a third the number of people that the Olympic Plaza can, the indoor facility can host the ceremony regardless of weather conditions.

Pocog has already completed its review of whether the figure skating and short track speed skating events can still be held at the Gangneung Ice Arena if it also needs to host the opening ceremony.

“If the ice is covered with a carpet during the ceremony, we can have the ice quality back to international standards four hours after the ceremony,” said an ice expert.

Despite the Gangneung Ice Arena potentially being the better option, Pocog made it quite clear that the venue almost certainly won’t change.

“The venue of the opening and closing ceremony of the Olympics is a promise made internationally,” said a source close to Pocog. “To change the venue, we need an approval from both the International Olympic Committee (IOC) and the Olympic Broadcasting Services (OBS). We would not be able to perform the majority of the program scheduled for the opening ceremony and the refund process would be very complicated.”

If the Olympic Plaza cannot be used for its four scheduled uses - the opening and closing ceremonies of the Winter Olympics and the Paralympics - Pocog could face criticism, as the 63.5 billion won ($59 million) used to build the plaza will go to waste.

“Pocog’s decision to not build a roof to save on construction expenses has now led them to have to resort to having a Plan B,” said a source close to Pocog.

Both the 2010 Vancouver Winter Olympics and the 2014 Sochi Olympics opening and closing ceremonies were held at venues with a roof.