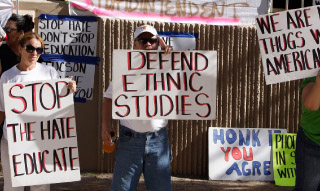 A teacher asked high school juniors in her class about the national origin or ethnicity of each student. It was the first class of the school year, and it was a chance to get to know each other. She told the students who said they were Chinese or Japanese that she liked their cultures. But she responded differently to six Korean students in the class. To each student who said he or she was of Korean origin, she repeatedly said, “I hate Korean.” In another class, she told the Korean students to raise hands and again said, “I hate Korean.”

This absurd incident happened at Bergen County Academies, a prestigious high school in Bergen County, New Jersey. The area, not far from New York City, has a large Korean population.

Upon hearing the disparaging remarks, Korean students went to the school counselor and reported the teacher. However, school administrators, including Principal Russell Davis, said that the jokes were misinterpreted and attempted to smooth over the incident with an oral apology to the Korean students in the classes.

Some parents of Korean students hoped to end the controversy quietly, out of fear that if the teacher in question were to be fired, other teachers may hold a grudge against the students and not write recommendations needed for college applications. They want to move on quietly.

However, the incident was reported in the JoongAng Ilbo’s New York edition and became a controversy throughout the local Korean-American community. As attention grew, the school transferred the teacher to another school within the county.

In response to the school’s handling of the incident, local Korean-American students, Korean-American organizations in New Jersey and civil groups are collecting signatures demanding strict punishment, such as revocation of the teacher’s license, a reinvestigation and a plan to prevent future incidents.

If a teacher said similar comments about Jewish or black students, follow up measures would have been very different. It was an unacceptable remark in American society, which values diversity, especially in school. Its fortunate that people raised their voices before letting people think that hating Koreans is okay.

I had a similar feeling about the outcomes of President Moon Jae-in’s visit to China. U.S. Senator Cory Gardner, the chairman of the Foreign Relations Subcommittee on East Asia, the Pacific, and International Cybersecurity Policy, said that China’s economic retaliation over the Thaad deployment in the previous administration resulted in as much as 13.5 trillion won ($12.5 billion) in damage. Korea did not bring the case to the WTO or get any apology. Korea tried to handle the issue quietly. In the end, group tours to Korea are still restricted. If Korea had spoken up early on, we wouldn’t be dragged like this.