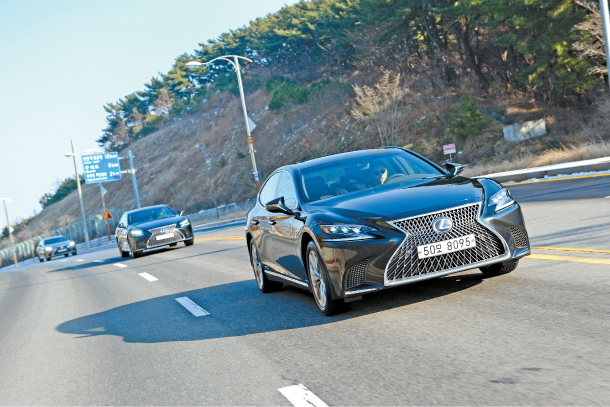 The new Lexus LS 500h on a test drive in Incheon on Thursday. [LEXUS]

INCHEON - The new Lexus LS 500h, the luxury sedan’s first overhaul in 11 years, is a hybrid in many aspects - and it’s not just the half-electric, half-petrol engine.

The premium five-seater, which competes with Mercedes-Benz’s S-Class, BMW’s 7 Series and Audi’s A8, distinguishes itself from German competitors by thinking outside the box of the conventional executive sedan.

Still, it remains to be seen whether the progressive design will suit the relatively conservative taste of some Korean consumers.

The hybrid model launched in Korea on Wednesday, with a gasoline version slated to launch next year. The hybrid comes with a 3.5-liter (1-gallon) V6 petrol engine with two electric motors.

The model’s exterior is sportier than its predecessor thanks to a 5,000-layer spindle grille. From certain angles, the car even looks like a coupe.

The reclining seat was equipped with diverse convenient features one might expect in a luxury car, from a strong massage system to a touchscreen that allows passengers to control the seat position, temperature, air flow and music selection. Suede and wood amplify the luxury vibe. Comfort is comparable to lying on a sofa.

There were times when the engine seemed louder than expected from a premium sedan, especially considering it’s a hybrid. If a VIP was expecting a quiet ride, the engine sound might be a tad much.

The car comes with four driving modes - Eco, Comfort, Sport and Sport+ - but even in Eco and Comfort modes, the engine was clearly audible, the sound an aggressive roar usually found in a sports sedan.

“By ‘emotional driving,’ we mean giving the feeling that the driver wants to drive more,” he said. “For example, it means the handle moves precisely with the driver’s control and accelerates in accordance to the driver’s command. But we also put a lot of consideration into the VIP backseat.”

With such consumer patterns, it is questionable whether Lexus’ new “emotional driving” initiative will satisfy the needs of its major demographic. After all, older Korean drivers prefer more conventional luxury traits in their cars as represented by a quiet and more refined driving experience.

Lexus Korea aims to sell 1,200 units of its new model each year. The rear-wheel drive version starts at 151 million won.