An unmerry Christmas at Incheon due to fog

An unmerry Christmas at Incheon due to fog 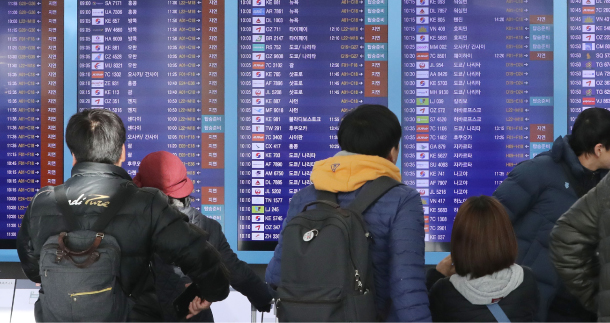 Flight passengers on Monday check the billboard that informs which flights are delayed or canceled due to thick fog around the airport. [YONHAP]

As of 1 p.m. Monday, 280 flights were delayed with two cancellations, although airport operations have already returned to normal after the fog cleared up on Sunday, the airport authorities said.

“The 280 delays were caused by schedule rearrangements triggered by cancellations on Dec. 23-24,” an airport official who declined to be identified said. “Right now, there are no delays due to the fog, and two cancellations are due to no reservations.”

Some 1,000 flights were delayed or canceled during the two-day period because of bad weather that started affecting the airport’s operations on Saturday.

Thick fog on the western coast, where the airport is situated, also caused 468 delays and 58 cancellations Saturday. The IIAC said 36 other flights bound for Incheon were forced to land at other airports in the country.

An IIAC official said delayed or canceled flights from Saturday caused a logjam on Sunday.

The Aviation Meteorological Office issued a low visibility warning for Incheon International Airport at 1:35 a.m. Sunday and lifted it some four hours later.

This type of warning is issued when visibility is under 400 meters (0.25 miles). Visibility at the airport dropped to 50 meters at one point Saturday.

Incheon airport is keeping its immigration counters and customs areas open for 24 hours to handle passengers on delayed flights from Saturday. Officials at the airport have also set up makeshift areas with mattresses and blankets while offering complimentary drinking water and instant cup noodles.

Travelers whose Christmas plans were thrown off took to social media to complain about inadequate services by airlines.

They claimed they were never properly informed of changes to their flight schedules and some were forced to wait for several hours in their seats while their aircraft remained on the ground.

While the airport officials were grappling with fog, other parts of the country were blanketed by ultra-fine dust Sunday.