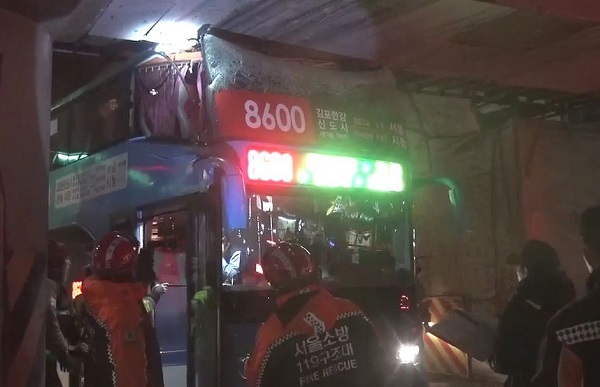 A double-decker bus crashes into an overpass at the intersection of Dangsan Station in Yeongdeungpo District, western Seoul, on Dec. 24, leaving 13 passengers with minor injuries. [YEUNGDEUNGPO FIRE STATION]

A red double decker bus smashed into a railway overpass that was too low for it to clear, injuring 13 out of 23 passengers.

The accident occurred at the intersection near Dangsan Station in Yeongdeungpo District, western Seoul, on Dec. 24 at around 6:50 p.m. when the driver of an 8600 bus switched from the third lane to the first under the overpass, which has a vehicle height limit of 3.5 meters (11.48 feet). The bus is 4 meters tall. The 8600 is an express bus that travels from Gimpo, Gyeonggi to Seoul.

To prevent accidents, double-decker buses must travel in the third lane, which is clear of the overpass. Yeongdeungpo police believe that the driver, who usually drives regular buses, forgot that he was maneuvering a double-decker and switched lanes to turn left at the intersection.

The 13 passengers who suffered minor injuries were transferred to the nearest hospital.

An 8601 bus also crashed into the overpass last December.

After the collision in September, the Gyeonggi government changed double-decker bus routes so that they could avoid turning left under the overpass at the intersection of Dangsan Station.

Police speculate, however, that the bus driver on Sunday ignored the route change to travel faster.