People on Monday pay tributes and offer flowers at a mourning altar set up in Jecheon for the 29 victims who died in a fire Thursday at a fitness center in Jecheon, North Chungcheong. [YONHAP]

Police raided the residences of the owner and custodian of the multistory fitness center that caught fire last week in Jecheon, North Chungcheong, after arresting them for involuntary manslaughter.

The raids, carried out Monday morning, were made a day after police arrested the duo and four days after the Jecheon blaze killed 29 people, mostly women, and injured 37 others.

Police said they were planning to seek a pre-trial detention warrant for the 53-year-old owner, who’s only been identified by the surname Lee, and the 50-year-old custodian, who’s surname is Kim, by Tuesday morning.

Lee faces a double charge of violating the Act on Free Prevention and Installation, Maintenance and Safety Control of Fire-Fighting Systems and committing involuntary manslaughter by professional negligence, while Kim was charged with the latter.

If Lee is found guilty of closing or shutting down a fire-prevention system, preventing the victims from escaping the building by blocking emergency exit routes, he could be punished with 10 years in jail or a fine of up to 100 million won ($92,900).

An involuntary manslaughter by professional negligence conviction carries a sentence of up to five years or a maximum 20 million won in fines.

Jecheon police said sprinklers in the first floor lobby, near the origin of the blaze, had been shut down, accelerating the spread of the fire.

A fire exit on the second floor of the building, where most of the dead bodies were found, was blocked by iron shelves used to store supplies. 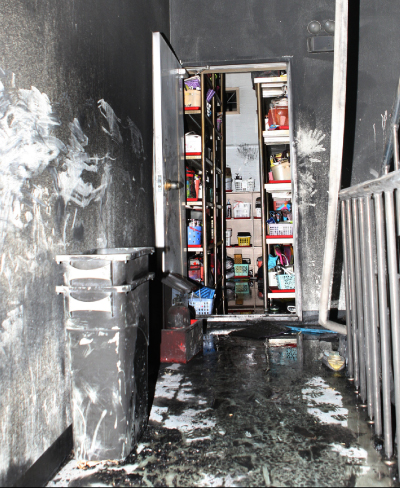 Eight people including Lee were legally in charge of evacuating people inside the nine-story establishment, but only a few - excluding Lee - carried out their duties, according to police. All eight managers safely escaped the engulfing fire, while Lee is known to have sustained minor injuries.

Lee testified he tried to douse the blaze on the first floor with a fire extinguisher, but realized it was getting out of control.

He ran up to the eighth floor yelling orders to evacuate. He then climbed onto a seventh floor balcony to dodge smoke, according to Jecheon fire officials, and was brought to the ground by a private ladder truck that arrived at the scene.

Lee claimed he didn’t alert the women in a second-floor sauna because he feared walking in on them naked.

The National Fire Agency formed a 24-member task force Monday, including 10 experts from the private sector, to investigate the cause of the fire, saying it would announce its conclusions by January 12 to prevent future calamities.

Prime Minister Lee Nak-yeon visited the joint mourning altar in Jecheon Sunday and told families of surviving victims he would get to the bottom of the case.