The KLPGA Tour has reappointed leading rules official Choi Jin-ha, who resigned over a controversy at the KB Financial Star Championship, the Tour’s major event, in October. 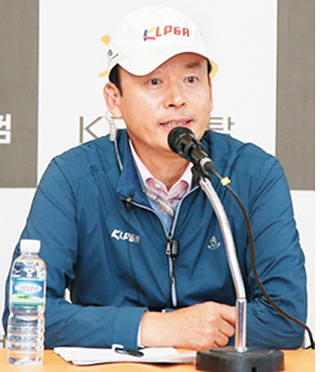 Choi Jin-ha speaks during a press conference at the KB Financial Star Championship in October. [KLPGA]

The rules controversy at the KB Financial Star Championship was an international issue. Because the line between the green and the fringe was set vaguely during the first round, held at Blackstone Golf Club in Icheon, Gyeonggi, a number of players picked up their balls on the fringe and were given penalties. But once foreign players started making complaints about the penalties, organizers ended up canceling the first round. The format of the tournament was switched to a 54-holes stroke play event.

Because of the first-round cancelation, the organizers of the tournament were given the satirical Tom Sawyer Award for Negligent Yard Work by Golf.com in November. The troubled tournament was also selected as one of Golfweek’s top 10 golf controversies of 2017.

Though Golf.com referred to Cho as the KLPGA Tour’s “scapegoat,” it is the responsibility of the leading rules official to establish the border between the green and the fringe, as they are the ones who set the course.

In February 2016, the KLPGA Tour had sent out an advertisement looking for a leading rules official. The leading rules official is in charge of setting the rules for all KLPGA tournaments. At the time, the Tour required a minimum of six years of experience, and a number of candidates who fulfilled the requirements applied. However, none of them were hired by the KLPGA Tour.

Shortly after, they distributed another notice looking for a leading rules official but got rid of the experience requirement.

“It wasn’t mentioned, but they changed the experience from six years to four years,” said the KLPGA Tour’s rules official.

This allowed Choi to be one of the candidates, as he had exactly four years of experience and had organized fewer than 10 tournaments. Though Choi had no experience as a rules official, the KLPGA Tour still appointed him for the job.

Once Choi started, he was repeatedly criticized for his poor judgement and misleading explanations.

During the 2016 Caido MBC Plus Women’s Open, Choi was criticized for transporting a player, who injured her finger, for three holes. Since all players are required to walk throughout the round, except when there are carts assigned for all players in between the holes, Choi’s judgment violated KLPGA rules.

In September of 2016, during the KLPGA 2017 Volvik Champions Open, Choi once again caused controversy after removing a boundary stake on the course during the tournament. When asked about the situation, rather than offer an apology, Choi made an excuse, saying, “the head of the course management team pulled out the out-of-bounds stake, not a rules official.”

However, Yeong Gwang Country Club’s course management team manager pointed out that rules officials are responsible for such issues, as they make the final check of the course.