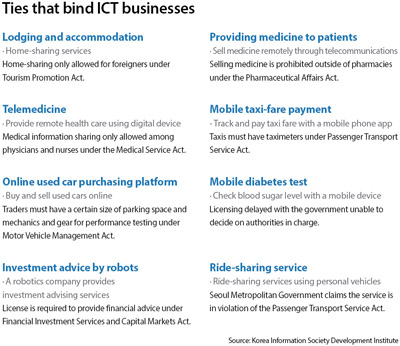 In 2004, Infopia developed a mobile phone through which a person could measure his or her blood sugar level and send the result directly to a doctor or hospital. The company, which eventually became Osang Healthcare, developed the device in collaboration with LG Electronics.

Reviews were glowing. Some people predicted it would “revolutionize” the global telemedicine industry.

But after six months, LG stopped making the device entirely. Approval by authorities was delayed and eventually, the smartphone was developed.

The so-called “diabetes phone” is a prime example of an invention that successfully combined information and communication technologies but was doomed by regulations.

In fact, the company didn’t give up on the diabetes phone. With further development, it came up with a different kind of blood glucose monitoring system in 2008. That device has fared well in countries such as the United Kingdom, where telemedicine services are legally allowed. In 2016, nearly 90 percent of Osang Healthcare’s sales of the devices were in markets outside of Korea.

Domestic sales are insignificant. Medical information that patients measure themselves cannot be sent to medical centers under the current medical services act, which stipulates that medical info can only be shared among physicians and nurses.

According to a report released this month by the Korea Information Society Development Institute, a state-run policy research institute, one of the main culprits is Korea’s “positive” regulatory system. The system identifies specified actions or rights as being legal. Anything that falls outside of those categories is illicit. New technologies and services - by their very newness - are not covered in the regulations and therefore aren’t allowed.

“Obstacles that hamper the vitalization of new industries [include] a positive legal system and adamant privacy protection law, redundant or partitioned regulations due to [re]organizations of government ministries [in charge],” said the institute in the report.

Home-sharing, a service made widely popular by Airbnb, is also a victim of such a regulatory system.

The country’s tourism act stipulates that home-sharing is allowed for the owners of hanok, Korean traditional type of housing, and in-city private residences - but only with foreigners. This means offering a spare bedroom to a Korean citizen is strictly forbidden.

The institute’s report also identified “passive governing” by authorities as another problem.

Poolus, a local ride-hailing service, came under fire in November after it decided to expand its operations to 24 hours. That put the company under police investigation for possible violation of the passenger transport service act. Previously, the service hours were limited to morning and evening.

The decision by the ministry was seen by many industry insiders as a protection of the local taxi industry.

Uber, a U.S. car-sharing service, was declared illegal in 2015 after fierce opposition by taxi drivers, who claimed that their livelihood would be jeopardized.

“Reasons behind the failure to deregulate are resistance by groups who profit from existing regulations and protection and the authorities’ wariness of such opposition,” said Lee Kwang-hyung, a professor at the graduate school of future strategy of the Korea Advanced Institute of Science and Technology.