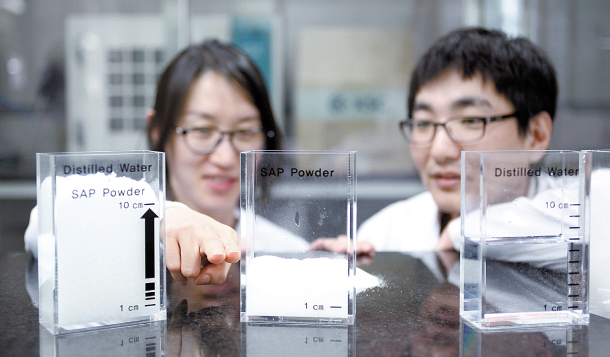 Researchers at LG Chem conduct experiments with super-absorbent polymers that the company produces at its plant in Yeosu, South Jeolla. [LG CHEM]

LG Chem, Korea’s top chemical company and battery producer, is expanding its production capacity for basic materials in order to enlarge its share in the global market.

The company said through a press release on Tuesday that it will pour in 300 billion won ($278.64 million) and expand the company’s plant in Yeosu, South Jeolla, to increase the output of acrylic acid and super-absorbent polymers.

Acrylic acid is used for textile and paints. Super absorbent polymers are used to make diapers and sanitary pads.

The expansion will be completed in the first half of 2019. The production capacity of acrylic acid will increase by 180,000 tons to a yearly output of 700,000 tons. Output for super absorbent polymers will be boosted by 100,000 tons to 500,000 tons per year, according to the company. The impact of the expansion on the company’s sales will amount to 300 billion won per year, the company estimated.

“We expect the expansion of the factory will stabilize the supply of basic materials and increase super absorbent polymer sales,” said Son Ok-dong, the head of the company’s basic materials division.

The investment plan announced on Tuesday is the latest initiative in a series of financial commitments that the company has made in the past couple years to make its basic materials business more globally competitive.

Last year, the company committed 400 billion won to increase its production capacity of elastomer, used for sound insulation and auto parts such as bumpers. The expansion is set to be completed this year, which would more than triple the company’s elastomer output from 90,000 tons per year to 290,000 tons. The company is also building a research and development center in Naju, South Jeolla, which is dedicated to so-called “advanced” basic materials. In total, LG Chem has allotted more than 1 trillion won for basic materials, the company said in the statement.

As a result of its aggressive financial commitment, LG Chem expects its sales from “advanced materials” such as super absorbent polymers and elastomer to jump from the current 4 trillion won to 7 trillion won by 2020.