New Year pre-orders should be big

New Year pre-orders should be big 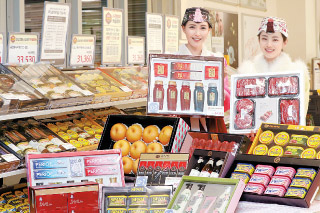 Retailers are expecting a rise in gift box sales thanks to a revised antigraft law approved earlier this month. The ceiling for gift exchanges was raised to 100,000 won ($92.98) from 50,000 won.

Major retailers announced their schedules for gift set pre-orders on Tuesday. Lotte Department Store will open sales on Wednesday, while discount chains Emart and Lotte Mart will start on Thursday. Hyundai and Shinsegae Department Stores will start next Friday. Most pre-orders run through the month of January and end two to three weeks before the Lunar New Year, which falls between Feb. 15 and 17.

Korea has a long tradition of exchanging gifts with friends, co-workers and family on major national holidays, New Year and Chuseok, the Korean harvest festival. The custom is a seasonal boost for retailers.

For the last five to six years, most retailers have offered pre-orders. The company automatically sends the gifts to designated recipients a few days before the holiday.

This year retailers have added more products to the pre-order lineup and started pre-orders earlier.

In 2012, only 1.2 percent of Emart’s gift box sales for the New Year holiday were purchased in advance. Last year, that figure shot up to 21.4 percent and is forecast to reach 25 percent this season.

Gift sets reserved offer “early bird” deals such as discounts and promotional events. The variety of products sold is expanding every year thanks to competition among retailers - pulling in more customers along the way.

Hyundai Department Store, for example, will offer a maximum 70 percent discount on 200 gift sets reserved in January. Discount chain Homeplus will give out gift cards for those who spend at least 300,000 won on New Year hampers.

Last winter, New Year sales were badly hurt by the so-called Kim Young-ran Law that went into effect a few months earlier. It put strict limits on gifts that could be given to public servants, a category that was defined very widely. People were very worried about getting caught violating the limits.

The limits were raised earlier this month because of the negative impact they had on retailers and other sectors of the economy. The limit for gift sets of in which agricultural, marine or livestock products take up more than 50 percent of the value was raised to 100,000 won from 50,000 won.

The revision of the ceilings was reflected in the list of hampers unveiled by department stores and discount chains on Tuesday. Lotte Department Store expanded hampers priced lower than 100,000 won to 136 from 93 last year. Emart also increased its offerings of products priced between 50,000 won and 100,000 won by 20 percent year on year.