Gov’t will listen to victims before deciding on deal: Kang

Gov’t will listen to victims before deciding on deal: Kang 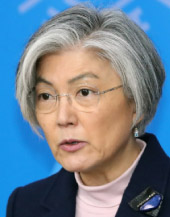 Korea’s foreign minister said Tuesday that the government will make its final decision on a controversial deal with Japan over its wartime sexual slavery of Korean women after listening to opinions from victims and civic groups.

Kang Kyung-wha said during a press meeting in Seoul that the previous government seemed to have not made sufficient efforts to gather opinions before reaching the so-called comfort women deal in December 2015.

Her remarks came a day before a task force is to announce the outcome of its months-long review of the agreement under which the two countries promised to leave behind the issue of Japan’s wartime sexual enslavement of Korean women, who are euphemistically called comfort women.

“It is basically a human rights issue, and there are victims whose human rights were directly affected and civic groups that have supported them for decades,” Kang told reporters. “In consideration of the outcome of the task force’s review, I think it is right for us to reflect the voices of the victims and the civic groups sufficiently through sufficient communication before making the government’s stance [on the issue].”

Under the deal, they agreed to “finally and irreversibly” resolve the comfort women issue, while Tokyo gave an apology for its colonial-era atrocities and agreed to contribute 1 billion yen ($8.9 million) to a foundation dedicated to supporting the victims.

It, however, prompted strong criticism from victims and civic groups as they claim that Japan’s apology was not sincere enough and that the government did not consult with them in advance. Some even call for scrapping the deal.

The Moon government, which took office in May, has said that there appear to have been procedural problems in reaching the deal. The task force launched after the new government’s inauguration is to announce the outcome of its review on Tuesday.

Japan is urging Korea to faithfully carry out what was agreed upon. The Seoul government is saying that it will seek a “two-track” approach in which such historical issues will be separated from bilateral diplomatic relations.

“The task force’s review is about the procedure by which the deal was reached and its evaluation, not about any policy recommendations,” Kang said. “What diplomatic policy the government is to take does not rely entirely on the review outcome.”

“The outcome should be taken into account but there should be communication with the victims as well.”

Kang declined to elaborate on what the task force will announce but noted that the previous government surely did not make enough efforts to communicate with the victims.

“The conclusion is that communication with victims lacked significantly until the deal was finally made,” she said. “It is the conclusion that we have expected but now we can say that with sufficient review and evidence.”

Kang said that “all options” should remain open on what action the government will take on the deal she said about 70 percent of Korean people cannot accept.

She still emphasized that the government will make all possible diplomatic efforts to upgrade bilateral ties with Japan despite many recalcitrant issues between the two countries, while facing “squarely” up to their shared history.

On North Korea and its nuclear issues, Kang said that the government will closely review all scenarios including additional provocations and a possible resumption of talks to deal with its growing threats.

With regard to China and bilateral ties that have been chilled over the deployment of a U.S. missile defense system here, Kang reaffirmed that the leaders of the two countries shared the view of wanting to normalize relations “in the mid- and long-term.”