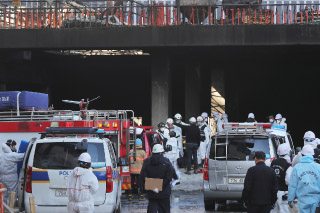 The police, firefighters and National Forensic Service on Tuesday conduct a joint forensic investigation to find out the cause of a fire on Monday at a construction site in Suwon, Gyeonggi, that killed one person and injured 14 others. [YONHAP]

A fire broke out Monday afternoon at a construction site of a studio apartment in Suwon, Gyeonggi, killing a 29-year-old worker and injuring 14 others, including two firefighters.

None of the injuries are life-threatening, said Suwon police. Two firefighters are being treated for first- and second-degree burns on their hands and faces at a nearby hospital, while most others are seeking medical attention for smoke inhalation.

Suwon firefighters investigating the blaze at the building said the fire appears to have occurred from negligent welding work, when a spark caught on a combustible material in the second basement floor and spread upwards.

Construction had been ongoing from the 14th floor to the second underground floor during the time of the accident.

The SK Lake Tower building was set to stand 46 stories by the time of completion, including five underground.

Local authorities are investigating the precise cause of the fire and whether safety rules were followed.

The fire occurred at 2:46 p.m. and was fully extinguished two and a half hours later. Some 120 firefighters from nine different fire departments were mobilized.

The 29-year-old worker who died at the scene, surnamed Lee, was identified as an employee of a construction company subcontracted with SK Engineering and Construction.

Police said Lee’s body was severely damaged when they found it after dousing the fire, adding he sacrificed his life to save his colleagues. All 12 other workers at the construction site evacuated safely.

Regarding a separate fire accident last Thursday at a fitness center in Jecheon, North Chungcheong, police filed a pre-trial detention warrant for the 53-year-old owner and 50-year-old custodian on multiple charges Tuesday, including involuntary manslaughter by professional negligence, which carries a sentence of up to five years or a maximum 20 million won ($18,600) in fines.

The duo was arrested on Christmas Eve Sunday for the calamity that killed 29 people, mostly women in a sauna, and injured 37 others.

The owner faces additional charges of violating construction and fire protection system laws. In one instance, police found that he blocked a fire exit on the second floor of the building with iron shelves to hold supplies.

Among the 29 deceased, 20 were found on the second floor, where the sauna was.

Aside from the owner’s mishandling of the disaster, surviving families of the victims also blamed Jecheon firefighters for botching rescue operations, saying more people could have been saved on the second floor if authorities did not hesitate to break the glass windows from the outside.

“Fire officials said they were unable to break through the sauna’s red clay room because the engulfing smoke hindered their sight,” said a family member. “But the clay room didn’t have a single burn mark. Everyone on that floor could’ve survived if fire fighters broke that window, which unlike whole glass, was very easy to crack.”