Cho Dae-seong defeated the Korean national men’s table tennis team’s ace player Lee Sang-su 4-3 in the quarterfinals of the 71st National Men and Women’s Table Tennis Championship on Tuesday. Cho is the youngest player to have ever made it to the championship’s semifinals. 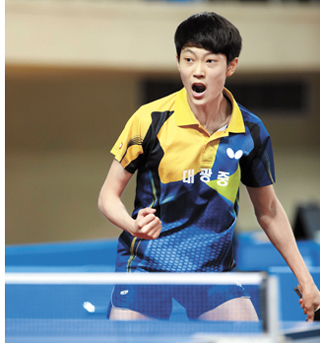 “That’s something that other players have never achieved,” said Yoo Nam-kyu, gold medalist in men’s singles at the 1988 Seoul Summer Olympics. Cho lost 4-0 to Jang Woo-jin, who won the 2013 World Junior Championship, in the semifinals. Jang went on to the men’s singles final, losing 4-2 to Kim Dong-hyun.

The National Men and Women’s Table Tennis Championship is open to all table tennis players, both amateur and professional. The tournament is played according to a randomly assigned bracket, disregarding players’ previous experience. Cho easily cruised through the first three rounds and then defeated Lee Seung-joon 4-3 in the round of 16.

Cho then faced Lee, 27, who was ranked as high as 10th in the world this year. Though there was a huge gap in experience between the two, Cho didn’t show any sign of nerves and defeated Lee, winning the last set 11-5.

“I played hoping to learn, but it led to a better result,” Cho said.

In the tournament, Cho defeated four professional players. Cho started table tennis in first grade, following his uncle who used to be a table tennis player. By sweeping a majority of the junior tournaments in Korea, Cho quickly became a new hope for Korean table tennis. Cho had to take a year off after elbow surgery in 2015, but he made a successful comeback, winning three events at the World Cadet Challenge. This year, Cho continued his stride, making it onto the Korean junior national team.

“[Cho Dae-seong] has great power and control in his forehand drive, which is nothing like the young players,” said Kang Moon-soo, vice president of the Korean Table Tennis Federation. “He also has great endurance. Once he improves his backhand drive and skills, he can become a great player.”

In addition to Cho, Oh Jun-sung also grabbed attention in the tournament after he advanced to the round of 32. Oh is the youngest son of Oh Sang-eun, a former member of the Korean national table tennis team. Considering Oh Jun-sung is only 11, his performance was impressive, and he defeated high school players. Oh defeated two high school students before losing 3-0 to Park Jung-woo, a professional.