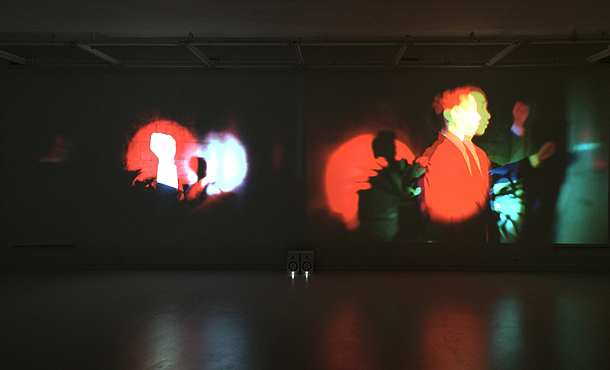 Artspace Boan1942, which stands opposite the western wall of Gyeongbok Palace in central Seoul, is a perfect space for the art exhibition “The Warm Supper Table” in memory of the iconic democracy activist and writer Kim Geun-tae(1947-2011).

The 75-year-old building once was a cheap inn where famous literary figures stayed and was renovated into an art space in 2010.

Now, one of its rooms has turned into a space for reading letters exchanged between Kim and his wife In Jae-keun, 64, also an important democracy activist, while Kim was being tortured in prison in the 1980s under the military regime. There are also letters exchanged between other activists and their families. This room is an installation work by artist Lee Boorok. Visitors are encouraged to write down an excerpt they like from these letters. The artist then burns their writing into wood.

The letters between Kim and In are also read by the modern day labor protesters in a video art piece titled “Okbaraji” installed in another room. It is a work by the artist group Listen To The City.

Kim’s letters show not only his integrity as an activist but also his poetic sensibilities. One letter reads, “The noises of rats [under the prison cell floor] was a salvation to me. My reason hesitated [to accept it as a salvation]... But reason was weak at the very moment when I was driven out of the world of common sense. It is not reason but only eyes and the voice of love that can ignite the embers of life in my heart.”

Okbaraji is the act of supplying a prisoner with food and clothes from outside the prison, mainly by the prisoner’s family. “This exhibition is not only about Kim or activists,” explained art historian Carey Park, who curated the exhibition.

“It is also about what the people did, like doing okbaraji for activists or supplying ‘a warm supper table’ for all that needed it. The title is also related to the ‘warm-hearted market economy’ that Kim looked after.”

The participants of the exhibit include artists such as Yangachi and Lim Ok-sang, a poet and a civic group.