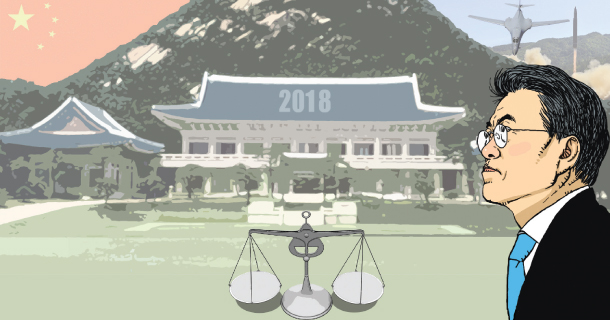 A very special year is ending. We have gone through so much and sometimes faced our limits. As threats of war hovered over the Korean Peninsula, we continued our internal fights, running the path of conflict without common sense and concession.

Six months have passed since President Moon Jae-in took office, but the aftermath of the last administration’s crisis is continuing. Key supporters of Moon are still making endless demands, while the conditions for survival at home and abroad are growing worse.

Due to the exceptionally heavy sense of debt to supporters who ended the Park Geun-hye administration, the Moon administration needed to demonstrate many outcomes quickly. It ran fast for the past six months while leaning largely to one side, and it is growing tired.

Because the government is leaning too far to the left, it has sometimes committed the mistake of losing large things to win small victories. Many policies, including job policies, are being pushed forward despite protests from the market, and they are now being reduced in the face of market resistance.

The people are split and embarking on a journey with two different compasses. While the government is making society’s disenfranchised the center of state affairs, those who saw success have largely stepped back, observing their future with an uneasy view.

The new year bestows upon us many risks. The North Korean nuclear crisis has already crossed a red line, but our leverage is shrinking while the international community, including the United States, is exhausted. The possibility of war on the Korean Peninsula is growing, and the United States is close to making a decision, but the Korean people are split.

The PyeongChang Winter Olympics are drawing near, but affairs at home and abroad are not amicable. Although we put earnest efforts to win the bid, the unity that the government and people showed at the 1988 Seoul Olympics is nowhere to be seen.

Interest rates will remain high starting next year and the global trend of tax cuts will pressure our economy. These factors will negatively influence capital flow, exports, household debt, investments and industrial competitiveness.

The Moon administration will face new kinds of risks next year and must change its attitude and direction toward state affairs. I recommend the following:

First, it must seek the truth based on science, facts and a sense of balance instead of leaning toward the left. This is very important. It must abandon the unicycle of labor and ride a balanced bicycle of labor and capital. This ride is only possible when the administration escapes from the extreme sense of debt to the anti-Park protesters.

The administration must demonstrate leadership and give one compass to the entire people. It must quickly end probes on so-called “deep-rooted evils” and engage adversaries. It must seriously reconsider policies that are facing protest from a majority, such as the nuclear phase-out plan, with a sense of responsibility before history.

Second, it must have a review session of overall foreign and security policies. It must seriously consider its relationship with the United States and China, whether there was anything wrong in defining its relationship with China and whether there is any problem in the alliance with the United States. It must think with a level head about how it will defend the country’s future when superpowers begin dialogues and negotiations on the North Korean crisis and if there is any possibility that Korea’s goal of unification will be sacrificed.

Third, the Moon administration must reshuffle the Blue House secretariat and key members of the cabinet to handle national crises. The late President Kim Dae-jung, who was elected 20 years ago amid a foreign exchange crisis, made agonizing decisions to appoint talented people based only on their ability.

Korea modernized within a short period of time and rose to become a middle power. Then why are we falling into an ordeal and stagnation? It is an issue we must seriously think about. The Moon administration will soon face its first anniversary. It must regain its sense of balance and picture itself in the spring of 2022.

*The author, a former minister of commerce, industry and energy, is chairman of the North East Asian Research Foundation.