Panel dissects the ‘comfort women’ accord

Panel dissects the ‘comfort women’ accord 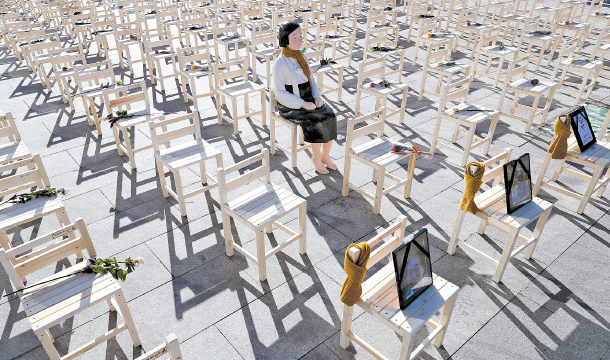 A statue of a girl representing the victims of the Japanese military’s wartime sexual slavery is seated among 300 empty chairs in Gwanghwamun Square, central Seoul, by a civic organization on the same day the Korean Foreign Ministry announced the result of a task force’s review of the 2015 deal on the so-called comfort women issue. The last weekly rally of the year protesting the issue was also held that day. [YONHAP]

The Moon Jae-in administration accused the former government of neglecting victims’ opinions while negotiating an agreement with Japan in 2015 to deal with the World War II sexual slavery issue, saying Wednesday it would individually interview all 32 Korean survivors to ultimately decide its official stance on the 2-year-old accord.

This could mean Seoul will scrap the so-called “comfort women agreement,” signed on Dec. 28, 2015 during the Park Geun-hye presidency, though Foreign Minister Kang Kyung-wha refrained from explicitly saying so during her latest public remarks.

During a press briefing in central Seoul, Kang went only as far as saying that the government would tackle the issue from the “victims’ perspective” and “prudently establish the government’s stance while also taking into consideration how it would affect Korea-Japan relations.”

On Tuesday, Kang said “all options” were on the table as to what the government will ultimately do with the deal and how it will subsequently reflect that position into its Japan policy. 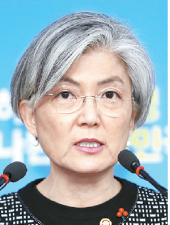 The announcement was made as Kang relayed the ministry’s conclusion after a months-long investigation into the agreement, which faced a backlash from progressive civic groups and several survivors here in 2015 because Tokyo didn’t acknowledge legal liability for the wartime atrocity. Japanese Prime Minister Shinzo Abe did, however, convey in a written statement his “most sincere apologies and remorse” to the victims. In addition, the Japanese government financed a $1 billion yen ($8.84 million) victims fund from state coffers.

What particularly ticked off many Koreans was that both governments agreed that the comfort women issue was “resolved finally and irreversibly,” and Tokyo’s warning to Seoul that it wasn’t going to apologize again. That prompted anti-Park protesters to raise the issue in the weekly demonstrations a year afterwards as hundreds of thousands of people took to the streets to urge Park’s ouster for various misdeeds.

Seoul’s Foreign Ministry also revealed Wednesday several parts of the negotiations between the two countries that were kept under wraps by the past administration, saying that in one instance, the Park government agreed it would try to persuade critical civic groups to accept the deal.

Tokyo’s Foreign Ministry said in a statement later Wednesday that it won’t accept any calls to amend the agreement, adding the attempt would make it “impossible” for the Japanese government to manage bilateral relations.

Moon had raised doubt about the agreement’s “procedural legitimacy” since the beginning of his tenure, saying it was “reality” that “most Korean people” didn’t accept it and that Seoul and Tokyo needed to spend more time to resolve the problem.

A nine-member task force led by a former columnist of the left-leaning newspaper Hankyoreh - which included mostly international affairs experts from the private sector - was formed on July 31 for the special truth-finding mission under the direct control of Kang.

Described in four major conclusions reached by the task force on Wednesday, detailed in a 31-page report, the past administration held a total of 12 meetings with Japan between April 16, 2014 and Dec. 28, 2015 for the comfort women deal. The issue was dealt with like “any other general diplomatic issue,” the task force concluded, as it was discussed between director general-level government officials.

The Park government signed the accord based on its own opinion without gathering testimony from the victims, said the task force. By doing that, it concluded, the comfort women dispute would “inevitably be revived” even though both governments had committed to a final, irreversible end two years back.

“History issues, like that regarding the comfort women, are difficult to resolve over a short period of time via diplomatic negotiation or political compromise,” the task force said, adding Korea and Japan should jointly carry out efforts to spread awareness in society and educate the future generation on a long-term basis.

The task force also blamed the Park administration for deteriorating Seoul-Tokyo relations by putting the comfort women issue’s resolve as a premise for dealing with most other bilateral issues, saying the Moon government would need to devise a “balanced diplomatic strategy” in which the tit-for-tat doesn’t “burden” the countries’ overall relationship.

The task force said that during negotiations on the deal, Tokyo asked Seoul not to “sway” in favor of Korean civic groups if they denounced the agreement, urging the Korean government to “convince” the groups to accept the accord.

In response, the Park administration said it would “try to convince” them if they express dismay.

On the symbolic comfort women statue erected across from the Japanese Embassy in central Seoul by a local civic group, Tokyo said it “would like to ask about the Korean government’s specific plan to relocate it,” to which Seoul replied it “recognized” Japan’s concern about its diplomatic mission’s safety and that it would “try to appropriately solve the problem” by talking with related groups.

When Japan said it was “inappropriate” that Korean civic groups were setting up comfort women-related statues in other countries, the Park government stressed that it wasn’t involved in the campaign, and that in sync with the bilateral agreement, it would continuously refrain from doing so while working towards the improvement of Seoul-Japan relations.

“The government accepts the task force’s conclusion with earnestness and humility,” Kang said during the press briefing Wednesday.

“As the minister of foreign affairs, I bow my head as I say it is extremely regretful and pitiful that [the government] has inflicted pain upon the victims, their families, the civic society that supported them as well as the entire general public for failing to sufficiently reflect a victims-based approach during the negotiations leading up to the agreement, which is the universal criterion for solving a human rights issue.”

Kang continued that the very purpose of forming the task force was to “respond to various critiques from the public” on the accord, and that it respected the group’s decision to disclose only the “minimum scope” of the bilateral talks required, in light of their diplomatic nature.

Thirty-two Korean women who officially registered themselves with the government as comfort women remain alive, down from the 47 tallied at the time the deal was announced in December 2015, and from the 238 who came forward in total.

It is unknown precisely how many Korean girls and women were forced to work as sex slaves in frontline Japanese brothels during the early 20th century, though some historians estimate a five-digit figure.