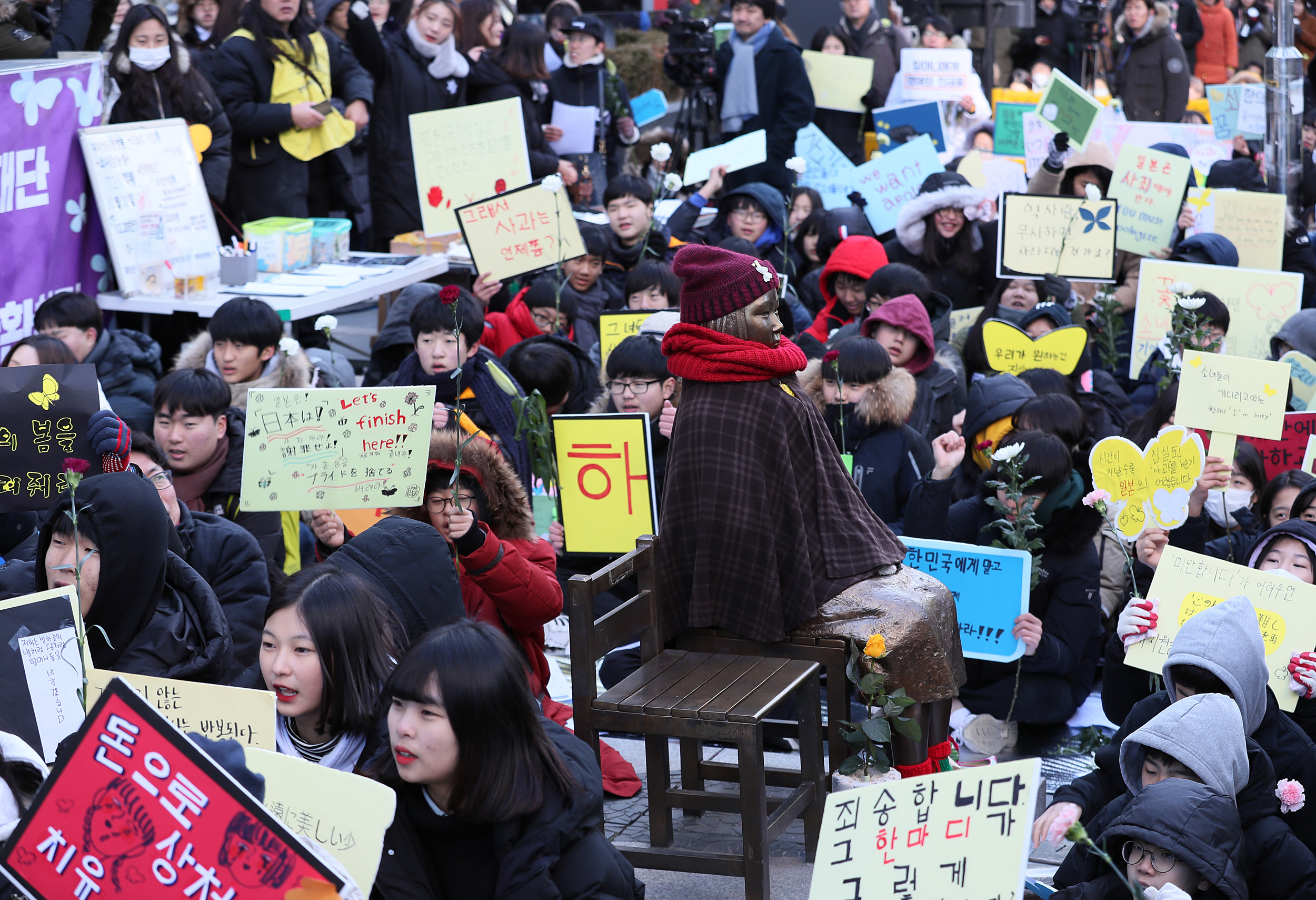 A weekly Wednesday rally protesting Japan’s wartime sexual slavery is held in central Seoul, on the same day the Korean Foreign Ministry announced the results of a review into the 2015 deal on the so-called comfort women issue. [YONHAP]

South Korea's previous government of ousted President Park Geun-hye kept part of a 2015 deal with Japan on resolving the issue of wartime sexual slavery secret from the public in order to avoid criticism of concessions made secretly to Tokyo, a task force said Wednesday.

After months of looking into how the unpopular deal was reached, the foreign ministry task force also said that the Park administration failed to make adequate efforts to listen to victims before reaching the agreement.

It called for the government to come up with a longer-term approach to resolve such a historical matter as the so-called comfort women issue, saying that "give-and-take" negotiations or political compromise could not be the ultimate solution.

"A victims-centered approach, which has become the norm when it comes to the human rights of women in time of war, has not been sufficiently reflected and the deal was reached through give-and-take negotiations like an ordinary diplomatic agenda" the task force said in its 31-page report on the outcome of its review.

"The agreement was finalized mostly based on government views without adequately taking into account the opinions of victims in the process of negotiation," it added.

The task force's findings will be presented to the government, which will finalize its stance on the matter, with no detailed timetable yet disclosed.

Foreign Minister Kang Kyung-wha expressed regret that the deal lacked the opinions of those involved and that the government will accept the task force's findings that she believes are "faithfully" answering questions surrounding the issue.

"Based on the findings, the government will gather opinions of the victims and others involved going forward with a focus to be placed on a victims-centered approach," Kang said. "In addition, action will be taken carefully in consideration of any impact that it could have on the relations between South Korea and Japan."

The task force composed of government officials and private-sector experts on history and relations with Japan was launched two months after the Moon Jae-in government took office to review the much-criticized deal reached under the previous Park Geun-hye administration.'

South Korea and Japan reached the deal on Dec. 28, 2015, under which they agreed to "finally and irreversibly" resolve the comfort women issue, while Tokyo apologized for its colonial-era atrocities and agreed to contribute 1 billion yen (US$8.9 million) to a foundation dedicated to supporting the victims.

The deal, however, prompted strong criticism from victims and civic groups who claim that Japan's apology was not sincere enough and that the government did not consult with them in advance. Some call for renegotiating or even scrapping the deal.

The task force said that the controversial wording "irreversibly" was proposed by the Korean side to make sure that Japan's apology would be permanent and not be taken back, a context distorted when Japan demanded the "final" and "irreversible resolution" to the comfort women issue, which was accepted in subsequent talks.

Seoul's foreign minister advised the presidential office to drop the word "irreversible" but this was not accepted, according to the task force.

The task force also apparently confirmed the speculation that South Korea compromised too much in their negotiations and that this fact was not made public so as to minimize public backlash.

Under the undisclosed agreements, Japan demanded the Seoul government not support relevant civic groups when they voiced their displeasure in relation to the deal and asked for detailed plans for a statue of a girl in front of the Japanese embassy in Seoul.

The girl statue symbolizing the hardship of comfort women has been regarded as an eyesore by Japan. Japan has frequently asked for its removal on the basis that it was part of the 2015 deal. The Seoul government denied any such agreement, saying that it has no authority to do so since the statue was built by civic groups.

In response, South Korea promised to make efforts of "persuasion" regarding the civic groups, while working to "appropriately" resolve the matter of the statue through consultations with the relevant organizations, according to the task force.

Responding to Tokyo's call for not using the phrase "sexual slavery" in referring to Japan's wartime history, the Seoul government affirmed that the official term is "comfort women" for those who served at frontline brothels, effectively giving into Japan's demand.

The task force said that the whole negotiating process -- a total of eight rounds of high-level talks starting February 2015 -- was driven by Cheong Wa Dae, and it took issue with the concentration of decision-making authority in the presidential office during the process.

It also noted that the foreign ministry, which was supposed to take a lead, failed to do so and its opinions were not sufficiently reflected in the deal.

The task force did not provide policy recommendations on the matter but advised the government to seek longer-term solutions to historical matters like the comfort women issue.

"It is hard to resolve such a historical problem as the comfort women issue through short-term diplomatic negotiations or political compromise. There should be longer-term efforts for the spread of values, awareness and education for future generations."

Japan has urged South Korea to faithfully carry out what was agreed upon. The Moon government has said that there appears to have been procedural problems but that it will seek a "two-track" approach in which such historical issues will be separated from bilateral diplomatic relations.

Korea was under Japan's colonial rule from 1910-45. Historians estimate that up to 200,000 women, mostly from Korea, were forced into sexual servitude during World War II. The number of surviving South Korean victims currently stands at 32.