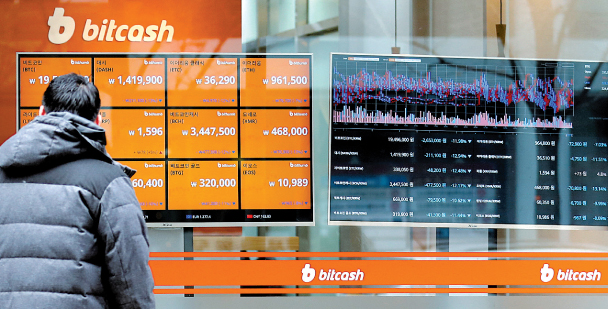 Displays at a cryptocurrency exchange in Jung District, central Seoul, show the prices of different cryptocurrencies on Thursday. The government announced it is mulling the possibility of closing down all such exchanges in Korea. [YONHAP]

The Korean government officially warned Thursday that it may shut down local cryptocurrency exchanges, causing a large tremor in the market.

Hong Nam-ki, the minister of government policy coordination, said Thursday after a meeting with high-ranking officials that the Ministry of Justice made a suggestion to close down the exchanges in Korea completely, the most drastic form of control of cryptocurrency trading in Korea.

The government is considering shutting all exchanges, Hong stressed, not merely those that have failed to fulfill government standards.

“The Ministry of Justice proposed during the meeting a special law be passed to shut down virtual currency exchanges,” said Hong during a press conference on Thursday. “[The government] will consider every option, including closing down the exchanges.”

During the meeting, officials also decided to prohibit the use of so-called virtual bank accounts in cryptocurrency transactions.

Up until now, cryptocurrency traders have been using so-called virtual accounts opened by local banks for which verification of user identity is impossible. Under a regulation announced Thursday, traders will have to use bank accounts bearing their real names. This way, the government can more easily tax transactions but also limit trading by minors and foreigners, which was banned on Dec. 12.

The government prohibited the opening of virtual bank accounts in the future. Existing accounts will have to be converted into named accounts in January.

Hong, who described Korea’s mania for cryptocurrencies as “abnormal,” said the government cannot overlook the situation any longer and will do what it can to block any influx of new investors. 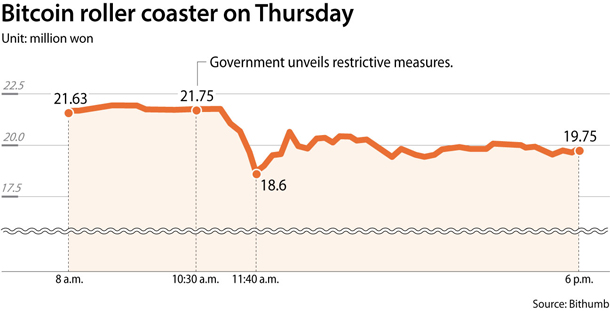 “Whether the cryptocurrencies are financial products or not is being reviewed by the Financial Services Commission,” said Hong. “We will have to see how the government will regulate the trading activity itself.”

Choe continued: “The government imposes tax on any type of income, even the profit from gambling.”

Immediately following the press conference on Thursday, the price of bitcoin at Bithumb, one of the largest cryptocurrency exchanges in Korea, tumbled.

“I think it’s ironic that while the government says it’s trying to protect investors, it’s only causing more fluctuations and uncertainties in the market,” said an industry source. “What they don’t realize is that by restricting cryptocurrency trading, they are also robbing incentives from local blockchain developers.

“They clearly lack an understanding of the ecosystem of blockchain, which cannot do away with digital coins,” the source added.