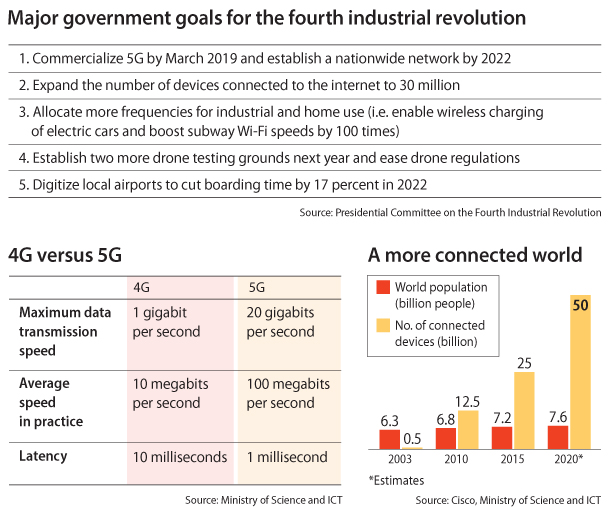 They were just a few goals outlined by the presidential committee on the so-called fourth industrial revolution on Thursday. The committee was tasked to coordinate policies on future technological development with relevant government ministries.

Special focus was paid to commercializing 5G before any other country in the world. Because of its high speeds and capacity for data transmission, 5G is considered the backbone of future businesses like self-driving cars and the Internet of Things, where everyday objects are connected to computers and smartphones.

To accelerate development of 5G in the private sector, the Ministry of Science and ICT will hold a frequency auction for 5G next June, a year earlier than scheduled. Korean mobile carriers had requested the government speed up allocation of 5G spectrums because it takes six months to a year to set up a nationwide network.

After the auction, the government hopes to commercialize 5G by March 2019 and establish a nationwide 5G network by 2022. To help mobile carriers build the network, the government plans to draft a regulation allowing mobile carriers to share basic infrastructure like telephone poles and cable ducts. With many potential business ventures banking on 5G, the Ministry of Science and ICT has allocated 27.4 billion won ($25.8 million) to start various test projects related to 5G, including self-driving cars, smart cities and virtual reality.

The ministry also hopes to foster the Internet of Things business by easing regulations. Currently, the government requires IoT start-ups to have 3 billion won in paid capital and three technical engineers. The ministry plans to ease the requirements within the first half of next year to increase the number of operators in the industry. The goal is to eventually have 30 million devices connected to the internet.

Newly allocated unlicensed spectrums will be used to boost subway Wi-Fi speeds by 100 times by 2020. Subway Wi-Fi has been particularly slow because of heavy user traffic.

The unlicensed spectrums also promise to improve the resolution of anti-collision sensors on self-driving cars by twofold and enable wireless charging of compact electric vehicles.

In drone policy, the Ministry of Land, Infrastructure and Transport will spend another 6 billion won - on top of 6 billion won already spent this year - on three drone flying fields. An extra 4 billion won will be spent on starting construction of two more sites. Within three years, the ministry hopes to operate six drone test fields.

Currently, there is one small field in Goheung, South Jeolla, but it is underequipped and not dedicated to drone flying, making it difficult for developers to test drones in the country.

To support Korea’s industrial drone market, which is still in its early stages, the government plans to buy 3,700 drones in the next five years.

As for recreational-use drones, the government will ease regulations on their flight after it determined they pose little danger.

“Currently, it takes about 45 minutes from arriving at the airport and going through all procedures to boarding the plane,” said Yoon Jin-hwan, a director at the Transport Ministry. “But by implementing smarter technologies like upgraded security check equipment, self-check-in counters and big-data-based passenger management, we expect to cut the time required for boarding to 36 minutes by 2022.”