‘Coco’ is a vibrant celebration of familial love

‘Coco’ is a vibrant celebration of familial love 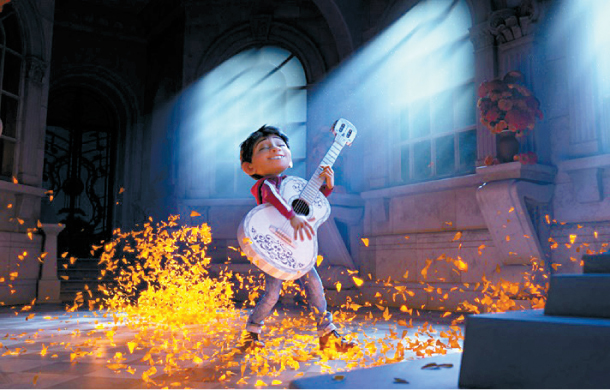 Disney-Pixar’s upcoming “Coco,” inspired by Mexico’s Day of the Dead, is a heartwarming coming-of-age story revolving around a boy named Miguel. [THE WALT DISNEY COMPANY KOREA]

Pixar has long proved its ability to create high-quality children’s movies that adults can love too, and the studio does not disappoint fans with the upcoming “Coco.”

Featuring an all-Latino cast, it is a tribute to Mexico’s vibrant folklore tradition with a bouncy and emotional story about family and forgiveness, backed by a strong soundtrack.

Considered a frontrunner for this year’s Academy Award for Best Animated Feature, Disney-Pixar’s latest film colorfully celebrates Dia de Muertos, or Day of the Dead, a Mexican holiday when families display photos of their departed loved ones to remember those who have passed away and to invite their spirits to visit the living.

The hero in the upcoming feature is Miguel (Anthony Gonzalez), a 12-year-old boy who is forced to repress his passion for music because his family forbids it after his great-great grandfather abandoned his wife and daughter, Coco, to pursue a musical career of his own.

Coming from a long line of shoemakers, Miguel is instead forced to join the family business. However, he is driven to follow his musical dreams after starting to believe that Mexican music legend Ernesto de la Cruz (Benjamin Bratt) could be his ancestor.

This emboldens Miguel to steal an old guitar from de la Cruz’s mausoleum on the Day of the Dead, which leaves him cursed and sends him to the land of the dead: a glowing metropolis that is reached after passing magical bridges made from floating marigold petals - visually the most remarkable moment in the film. In the land of the dead, crowded with spirit-filled skeletons, Miguel embarks on an odyssey to find his great-great grandfather, receive his blessing and return to the real world to pursue his dream, all while realizing the value of familial love.

Despite the film’s spellbinding visuals, it is also dark at times. In the intricate nature of the land, the dead fade away forever when they are forgotten by the living on the other side. This leads the film to present the idea that without a family, you ultimately disappear, even from the afterlife.

Directed by “Toy Story 3” (2010) and “Monsters, Inc.” (2001) director Lee Unkrich, “Coco” is a lighthearted movie that brims with visual pleasures and emotions while managing to be both fun and heartwarming. It features the intriguing tensions between the need to love and be loved by those nearest and dearest while also presenting old age, death and the afterlife as normal parts of life.