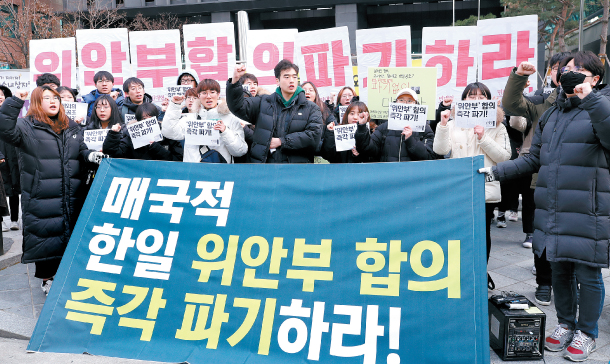 Student protesters hold a press conference in front of the Japanese Embassy in Jongno District, central Seoul, demanding the scrapping of the so-called comfort women agreement Thursday, a day after the Korean Foreign Ministry announced the results of a task force’s review of the 2015 bilateral deal to resolve the Japanese wartime sexual slavery issue. Similar rallies were held in front of the consulate in Busan, marking the one-year anniversary of the installation of a comfort women statue there. [YONHAP]

President Moon Jae-in declared Thursday that the 2015 agreement between Korea and Japan is highly flawed and doesn’t settle the issue of the Japanese military’s wartime sexual enslavement of Korean women, hinting strongly that he will call for renegotiations.

“It was confirmed that the agreement between the governments of Korea and Japan on the comfort women issue contained major flaws in terms of procedure and contents,” Moon said in a statement read by presidential spokesman Park Soo-hyun. “It is unfortunate, but we cannot evade it.”

Moon’s statement was his first response to the Foreign Ministry’s announcement Wednesday that Seoul and Tokyo chose to keep several arrangements secret when they announced the deal to end the long-running diplomatic battle over the Japanese military’ wartime sexual enslavement of Korean women. The accord was signed on Dec. 28, 2015, during the Park Geun-hye presidency.

At the time, foreign ministers of the two countries announced a three-point statement that included a Japanese government apology and a multimillion-dollar fund for the victims. The two countries agreed that the settlement was “final and irreversible” as long as Japan faithfully followed through with its promises.

According to the task force, six additional points - three demands by Japan and three responses by Korea - were also stated in the agreement but never disclosed to the public.

Japan demanded Korea persuade civic groups to accept the agreement, and the Park administration said it would try if necessary.

Comfort women is a euphemism commonly used today, but some consider it offensive because its use in wartime was an avoidance of the reality of the women’s work as forced sex workers or sex slaves.

“The undisclosed parts are one-sidedly burdensome for Korea,” Oh Tae-gyu, head of a nine-member panel that conducted a months-long investigation into the agreement and negotiation process, said on Wednesday.

The ministry also said the agreement failed to reflect the victims’ opinions, promising to interview all 32 survivors.

In his statement, Moon strongly hinted that the government will seek renegotiation or scrap the agreement.

“Although the agreement is an official promise between the two governments endorsed by the two countries’ leaders, I, as president, along with the Korean people, once again declare that it cannot settle the comfort women issue,” Moon said.

“The statement is not the government’s official position, but President Moon’s thoughts toward the issue,” a senior Blue House official said later. “Before the president’s New Year’s press conference in January, the government will decide its position and announce it.”

The Blue House official said Moon may announce the official government stance at the press conference or the government will announce it first and Moon will answer questions on it later at the media conference.

Moon’s statement included several key points that are likely standards for the government’s official position. He stressed that the victims should have been the top priority in the negotiations.

“It is extremely painful to learn that the deal was a political agreement that neglected victims and the people,” Moon said. “It was also confirmed that there were some secret agreements, which really disappoints the people. I am sending my deepest consolations to the victims, who probably suffered renewed pain.”

The presidential official said the 2015 agreement’s most serious problem is its failure to reflect the victims’ positions and public opinion. “We will listen to the opinions of the survivors and various organizations that are involved in the matter before deciding the official government position,” the source said.

He also flatly rejected the possibility that Moon will talk to Japanese Prime Minister Shinzo Abe before deciding the stance.

He, however, refrained from discussing the possibility of terminating the agreement. “I don’t want to discuss what the government’s position is right now,” he said. “If the Blue House says something, it could be treated as a guideline for the government to make its final position, so it is a sensitive issue.”

Regarding concerns that scrapping a bilateral agreement will be a serious diplomatic problem, the source said the most important thing is the comfort women. “No other things are essential,” he said. “The task force already had serious consideration about the [diplomatic] issue.”

A diplomatic war appeared to be ahead between Seoul and Tokyo if the Moon administration seeks to amend the deal, not to mention scrapping it. “Abe reacted that the agreement will not move even 1 millimeter,” the Nihon Keizai Shimbun reported Thursday.

Japanese Foreign Minister Taro Kono said any attempt to change the settlement will complicate bilateral ties. “It is deplorable that Korea unilaterally made public the undisclosed contents,” he said Wednesday. Kono also told Japanese media that he told Korean Foreign Minister Kang Kyung-wha that any attempt to revise the agreement will make bilateral relations “unmanageable.”

Moon said Thursday the government will manage Korea-Japan relations on two tracks by separating historical issues from other issues.

“I hope Korea and Japan will overcome the history of an unfortunate past and become true friends,” he said.