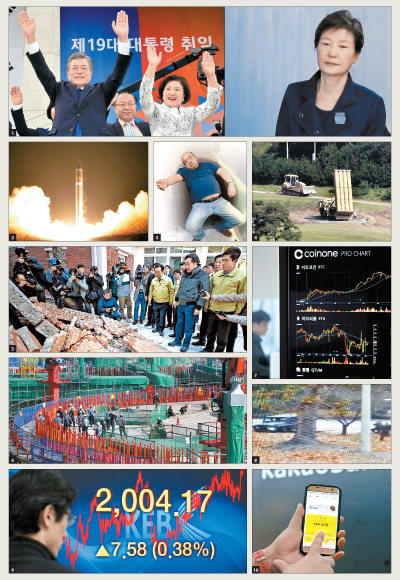 1. Left: President Moon Jae-in takes office on May 10. Right: Former President Park Geun-hye is detained on corruption charges. 2. North Korea launches the Hwaseong-15 ICBM on Nov. 29. 3. Kim Jong-nam, the half brother of North Korean leader Kim Jong-un, is assassinated at Kuala Lumpur International Airport on Feb. 17. 4. The final Thaad launchers are deployed in Seongju, North Gyeongsang, on Sept. 7. 5. A 5.4-magnitude earthquake rocks Pohang, North Gyeongsang, on Nov. 15. 6. After months of debate, construction of the Shin Kori 5 and 6 reactors resumes in October. 7. Cryptocurrencies see explosive demand. 8. A North Korean soldier defects to the South through the Joint Security Area in Panmunjom. 9. The Kospi, the Korean stock market’s main index, surpasses the 2,000 mark for the first time. 10. Internet banks like Kakao Bank and K bank threaten to upend the financial industry. [YONHAP]

For Park Geun-hye, 2017 was an ordeal without end. She started the year as an impeached, suspended president trapped in the Blue House. On March 10, the Constitutional Court removed her from office and, after 22 days at her residence in southern Seoul, Park was detained for trial on charges of bribery, abuse of power and leaking confidential documents. She ended the year in the same jail cell awaiting the end of her trial (with additional bribery charges). Her former confidante and partner in crime Choi Soon-sil is being tried on bribery charges, and the de facto CEO of Samsung Group, Lee Jae-yong, is also in jail, awaiting an appeal of his conviction for bribing Park through Choi.

For Moon Jae-in, 2017 was a historic triumph over the woman who narrowly defeated him in the 2012 presidential election. Eight weeks after Park’s removal, Moon won a snap election to replace her and, without any transition, started dismantling her conservative agenda and installing his own liberal one: raising the minimum wage, helping contract workers get salaried jobs and even reaching out to North Korea.

In a New Year’s address on Jan. 1, Kim Jong-un declared that North Korea had entered the “final stage” of testing intercontinental ballistic missiles. Exactly 50 weeks later at a munitions department meeting in Pyongyang, he announced the job was completed. In those weeks, Kim performed North Korea’s sixth nuclear test and fired 20 missiles of ever greater might. The Hwasong-15 tested on Nov. 29 was capable of hitting any part of the United States, including Washington.

Whether Kim actually has a precision guidance system or the atmospheric re-entry technology to actually attack the United States with a nuclear weapon is doubted. But it’s assumed he will eventually. U.S. President Donald Trump made the crisis scarier this year by taunting Kim with the nickname “Rocket Man,” threatening “fire and fury” and undercutting his own State Department. But by the end of the year, Secretary of State Rex Tillerson was sounding much more positive about talks with North Korea.

Because the murderers of Kim Jong-nam, the half brother of North Korean leader Kim Jong-un, chose a public place for the assassination, security cameras captured the whole event. We can watch the collaborators drink coffee and chat before the murder at Kuala Lumpur International Airport; the moments in which an Indonesian and Vietnamese women apply nerve poison on Kim’s face and his attempts to get medical help. We can even watch his motionless body on a gurney as airport staff prepare to move Kim to the ambulance where he finally expired.

But we don’t know why Kim was murdered so brazenly and so brutally. The North Korean plotters in Malaysia fled to Pyongyang. The two women are being tried, but they’re considered dupes. The reigning assumption is that Kim Jong-un feared being usurped by a member of his family - possibly with Chinese connivance - and Kim Jong-nam was the likeliest usurper. The murdered man’s son Kim Han-sol is now in that vulnerable position. He fled his home in Macau to an unidentified third country.

North Korea’s military capabilities reached new heights in 2017. After testing its fourth nuclear bomb in January 2016, it began working on an intercontinental ballistic missile engine and followed that up with its fifth nuclear bomb test later in the year. In July of that year, Pyongyang also threatened to turn Seoul into a “sea of fire.” That same month, South Korea and U.S. officials agreed to deploy a U.S. antimissile system known as Terminal High Altitude Area Defense (Thaad) in order to defend against a potential North Korean attack and installed it this year. However, Beijing opposed the decision, claiming Thaad’s powerful radar could be used to spy on China. As a result, China levied unofficial sanctions on South Korea, including a ban on entertainment stars and group tours to Korea. Despite this, the Kospi kept climbing, and in October, the two countries’ foreign ministries worked on a deal to normalize relations. In December, President Moon Jae-in visited Beijing where he met with Chinese President Xi Jinping and tried to work out a deal to lift the sanctions. But days later, the travel ban was still in place.

A 5.4-magnitude earthquake, the second-strongest quake ever recorded in Korea, hit the North Gyeongsang city of Pohang on Nov. 15, damaging at least 3,300 structures, displacing nearly 1,800 people and injuring some 90. The Korean government decided to reschedule the College Scholastic Ability Test (CSAT), the national college entrance exam, which was scheduled on Nov. 16, to a week later, citing safety concerns. Until the test date, authorities had to strengthen security at local education offices storing the test materials, dispatching additional guards and using CCTV cameras to watch the materials 24/7.

Experts found in some 100 locations in Pohang traces of soil liquefaction, which takes place when shaking causes soil to lose its shear strength and behave like a liquid. Though its effect can be incredibly destructive, as in the 7.5-magnitude quake in Niigata, Japan, in 1964, the Korean government confirmed in December that the level of liquefaction throughout Pohang was not worrisome. With the advent of the second-strongest quake to hit Korea, some geologists warned that the country may no longer be safe from major earthquakes with magnitudes higher than 6.

After a powerful earthquake struck the city of Gyeongju, North Gyeongsang, last year, residents began to worry about nuclear fallout. Four reactors lie within the city limits, and fears of a Fukushima meltdown swirled.

The issue became a hot-button one during this year’s presidential election. On the campaign trail, Moon Jae-in pledged to dismantle the country’s nuclear reactors and suspend the construction of new plants.

When he took office in May, he backtracked on the promise.

Facing backlash from energy companies that were already building two reactors - the Shin Kori 5 and 6 in Ulsan - Moon tossed the decision to a so-called citizens’ jury. A group of 500 randomly selected people with no background in nuclear science or energy policy would determine the reactors’ fate.

The jury voted to continue construction of the Shin Kori 5 and 6 reactors. However, an overwhelming majority also called on the government to eventually phase out nuclear power.

Almost immediately after the decision, Moon declared a resumption of the project. But his administration also released a timeline for shutting down the country’s older nuclear power plants and halting other new projects.

Bitcoin, the first decentralized cryptocurrency, saw an explosive demand and interest in Korea throughout 2017 as a number of retail investors flocked to the relatively new investment in the low interest rate era. About 21 percent of the world’s bitcoin trades on fee-charging venues involved the Korean won, according to CoinMarketCap earlier this month. The country has become home to the world’s busiest virtual currency exchange, Bithumb.

The cryptocurrency’s rise, however, prompted regulators to take action after years of simply urging caution, because bitcoin trading brought about reports of scams, hacking and identity theft.

The Korean government decided in December to prohibit minors and foreigners from trading at local cryptocurrency exchanges and forced the exchanges to allow for one real-name virtual account per user.

But the move didn’t tame wild investors. The price of bitcoin surged after the announcement because the action was not an all-out ban and many perceived it as recognizing the cryptocurrency as a legitimate investment.

On Nov. 13, a 25-year-old North Korean soldier surnamed Oh sped in a Jeep up to the Joint Security Area on the North-South Korean border, got out and sprinted across the demarcation line. His fellow soldiers chased him, shot at him 40 times and hit him in the shoulder, elbow and stomach. He collapsed on the other side of the barrier and was later collected by South Korean soldiers, then transported to a hospital where a doctor said he had a shocking amount of worms in his stomach. But the soldier survived and, upon waking, enjoyed listening to K-pop and watching clips from the movie “Transformers 4.” The event has become a symbol of the success of tightening sanctions in North Korea, driving its citizens and now even deeply loyal border guards to flee the confines of their crumbling homeland. More recently, it was reported that the former soldier has been given a lifetime supply of Choco Pies.


9. The economy takes off

After a decade of sputtering post-financial crisis, the Korean economy saw its strongest year in 2017. Exports recovered, the stock market broke records and growth projections rose.

After posting 13 straight months of growth, exports reached a monthly high in November, thanks to strong shipments of semiconductors, the chips that power computers, phones and other electronic devices.

The demand boosted the fortunes of Samsung Electronics, the world’s largest manufacturer of semiconductors, which saw its share price close at a record 2,861,000 won ($2,600) on Nov. 1. Dividends were raised. Shareholders were giddy.

The Korean market’s main index, the Kospi, closed at an all-time high of 2,557.97 on Nov. 3, and the Kosdaq surpassed 800 for the first time since 2007. All this led the Korean government to raise its GDP growth outlook for the year to over 3 percent, the highest since 2014.

Still, unemployment, especially among youth, remains a problem. Statistics Korea reported that 9.3 percent of Koreans aged 15 to 29 remained jobless in the third quarter, the worst quarterly record since the aftermath of the Asian financial crisis.

Internet banks, with their 24-hour service and exclusively online presence, threatened to upend the financial industry this year.

The wave began in April with the launch of K bank, Korea’s first internet bank established by a consortium led by Korean telecommunications giant KT. Over 20,000 people opened accounts on the first day alone.

Kakao, the developer behind the country’s most popular chat app, followed in July with the explosive launch of Kakao Bank. In less than a week, over 1.5 million people created accounts, leading to a momentary crash.

What drove the frenzy? Cut-rate loans. Borrowers with poor credit could find a sympathetic lender in K bank and Kakao Bank because they used wider sets of data to determine credibility. Existing banks scrambled to keep up, pushing down rates.

But as Koreans take on more loans, there is concern about spiraling household debt. And with K bank and Kakao Bank set to introduce mortgages next year, the borrowing frenzy is only just beginning.