The other side of Moon

The other side of Moon 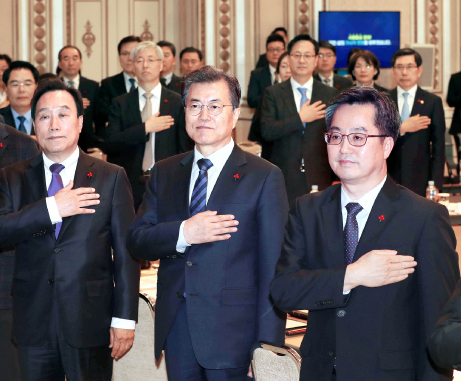 President Moon Jae-in, middle, salutes the flag with other government officials before convening the first meeting of the People’s Economic Advisory Board at the Blue House in Seoul on Dec. 27. [JOINT PRESS CORPS]

Economic forecasts for next year, the 10th since the global financial crisis, are interesting. Research institutes at home and abroad are all sanguine. Growth projections for 2018 are around 3.6 percent, 0.2 percentage points higher than this year. It is very different from the atmosphere around this time last year, when forecasts were gloomy over anticipations of a Fed rate hike.

The Group of 20 economies are all expected to record growth next year. While the United States is leading the global economy with solid 2 percent-level growth, the European Union will likely rebound in the spring, according to an Economist forecast.

Japan is expected to regain its growth momentum and China to continue its mid-6 percent growth. The Korean economy is expected to see growth in the 3 percent range, with an increase of per-capita income to $30,000.

Wall Street analysts are saying that the global economy is entering an era of “Great Moderation.” They believe stocks, raw materials and real estate markets will remain strong next year.

The pace of rate hikes is slower than the speed of economic recovery, allowing ample capital flow, according to their forecasts, and investment risks are low because of recovering international trade volume and improving business performance.

A decade is about the time people become oblivious to financial crisis. Many predicted the period of high tide would come sometime during the second half of next year. Will this time really be different? Are we going to break the pattern of economic crisis every 10 years?

There are warnings of serious impact, even if there is no crisis, when the asset bubble disappears. But it is the market’s sentiment to make investments as long as it is not peak time.

Governments are all aware of the sentiment. They are engaging in fierce policy competition to strengthen their economies during good economic times.

Global competition is about creating a business-friendly environment. Economic growth and job creation are not possible without companies, and the key is corporate tax cuts and deregulation.

The United States cut its corporate tax rate from 35 percent to 21 percent this year. Japan is giving any company that makes facility investments a 5 percent tax reduction. European countries including France are joining the competition.

But Korea is going in the opposite direction. There has been skyrocketing anti-corporate sentiment since President Moon Jae-in took office.

Conglomerates have been branded as “deeply-rooted evils,” small businesses are concerned about a minimum wage increase and reduction in work hours, and entrepreneurs say they do not want to do business in the country.

Pro-labor policies are unavoidable when the wage gap has become so extreme, but it should not translate to anti-corporate sentiment. Pro-business and pro-labor polices can find a balance.

The government must show unity through leadership and bring about a grand compromise that will expand our social assets. This is absolutely necessary to become an advanced country.

Signs of change are surfacing. After receiving a briefing on next year’s economic policy direction, Moon ordered deregulation for innovative growth. He also implored labor unions and employers to make concessions and share burdens to reach a compromise.

But simply asking companies and labor unions to face each other will not resolve problems. The government must invite them to a debate and find a bold resolution.

Moon has decided to not attend the business community’s New Year’s event on Jan. 3. Korea Inc. is feeling frustrated, wondering if he is skipping their event to please the labor unions.

Will Moon change his mind? The best he can do is hold hands with tycoons and assure them that the political winds hwave changed for his second year in office.

*The author is head of the Economic Research Institute at the JoongAng Ilbo.