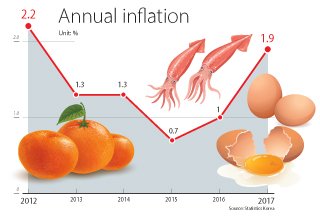 Korea’s inflation in 2017 was the highest in five years, pushed by increases in the prices of agricultural products after a pesticide scandal and harsh weather conditions.

The consumer price index for this year rose 1.9 percent from 2016, the highest increase since 2012 when prices rose an average of 2.2 percent over the year before, according to data released by Statistics Korea on Friday.

Although a nadir of 1.3 percent was hit in November, it bounced back slightly to 1.5 percent this month. That was largely due to increases in the prices of industrial and petrochemical goods and financial services such as insurance, the data showed.

But for the year, agricultural products such as eggs and fruits fueled inflation.

Data by the statistics agency showed that prices of agricultural products went up by 5.5 percent overall this year compared to the year before. The price of tangerines skyrocketed by 78.2 percent and that of eggs by 43.7 percent.

2017 was a particularly difficult year for chicken farmers with egg prices on a roller coaster ride.

In August, it was discovered that a large number of chicken farms across the nation were producing eggs contaminated by toxic chemicals such as dichlorodiphenyltrichloroethane, which were used to rid birds of fleas. This led to major retailers pulling eggs from the shelves and a severe shortage. The government was forced to import eggs from outside Korea.

In addition to the pesticide-scandal, avian influenza, also known as bird flu, swept the nation several times this year, which forced farmers to cull chickens and ducks. The latest case of bird flu was discovered earlier this week in Naju, South Jeolla, which led to the culling of some 23,000 ducks at a farm.

The price of squid also jumped by 49.9 percent this year due to short supplies.

According to the statistics agency’s findings, the squid haul during the first half of the year fell by 29.65 percent.

“The squid catch fell due to a rise in temperatures in the East Sea as well as illegal fishing by Chinese boats,” said an official from the agency.

Industrial products also rose slightly, with the gasoline price rising by 6.4 percent and that of diesel by 8.6 percent compared to a year before.