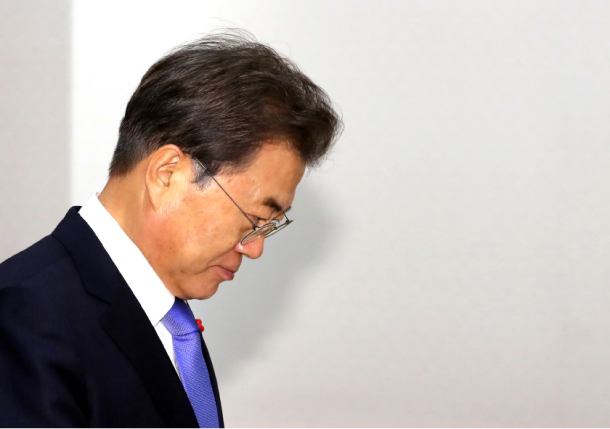 “Pacta Sunt Servanda,” said a former government official who knows what was going on between Seoul and Tokyo before signing the long-pending General Security of Military Information Agreement (Gsomia). The Latin formula, arguably the oldest principle of international law, translates as “Agreements must be kept.” The official said it was fortunate for South Korea and Japan to strike the deal.

The lead-up to the agreement had many ups and down. In 2012, the conservative Lee Myung-bak administration pressed ahead with it, but it ran aground in the face of criticism that the government tried to strike a deal under the table. The following Park Geun-hye administration dismissed it for quite a long time and concluded the deal in December 2016, following a tripartite deal in 2014 to share strategic information among the South Korea, the United States and Japan.

The Park administration’s agreement on Dec. 28, 2015 to close the chapter on diplomatic disputes over the thorny sex slave issue was made in a similar way. The Blue House was against the idea in the beginning. However, “we had to shift our approach after considering our own security risks.

Without taking Japan into account, we couldn’t effectively cope with a potential war on the Korean Peninsula, as Japan had six U.S. bases essential for supplies at emergency,” said a former intelligence officer at the presidential office.

The process of striking the two bilateral agreements — Gsomia and the agreement on the “comfort women” issue — shows two faces of the relations between Seoul and Tokyo. Both sides sharply disagree over history, but share nearly the same security interests. Security experts would take a step further. “Whenever a hegemonic state appeared in Northeast Asia, Koreans suffered. Their pain mostly originated with China, but sometimes with Japan,” said the intelligence officer. “Now is the time to be wary of China’s dramatic rise.” In other words, the government must find a balance between security and history, as famously described by Henry Kissinger, who said that calculations of power are a very complex exercise.

As a presidential candidate from the opposition, Moon Jae-in opposed the two agreements. After elected president, however, he acquiesced in Gsomia. But when it comes to the agreement on the sex slave issue, he said it had serious flaws. His choice now is a renegotiation or scrapping it. The Blue House says it does not necessarily mean a nullification of the deal, asking that the opposition refrain from over-interpretation.

Moon found fault with the agreement after a long deliberation. But he cannot strike a balance if he respects Gsomia while breaking the agreement over sex slaves. The government also unnecessarily provoked Japan by making public two-year old diplomatic documents even while it was fuming over Tokyo’s exposure of two-decades-old diplomatic documents. Nevertheless, he kept silent about the extension of Gsomia in August.

We are embarrassed to see the two faces of Moon — unfathomably generous toward China and alarmingly hostile toward Japan.