Fireworks in the winter are a cold and risky affair

Fireworks in the winter are a cold and risky affair 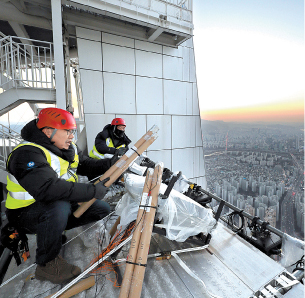 On Wednesday at 3 p.m., the temperature on the streets around the Lotte World Tower in southern Seoul was two degrees below zero Celsius. On top of the tower, 500 meters (1,640 feet) above, Seo Kyung-maan was going on his sixth hour preparing for a New Year’s Eve fireworks show. A winter wind of one to three meters per second slapped his face. The temperature was nine degrees below zero.

“Firework technicians like us constantly have this image of how the performance will turn out once the installation is finished,” said Seo, director of the fireworks company BSB.

Seo and his team were preparing for Lotte World Tower’s Countdown Show, which this year has the theme “Peace and Passion.” The event will be aired live on YouTube and Facebook between 11:40 p.m. on Dec. 31 and 12:10 a.m. on Jan. 1.

Installing fireworks on the exterior and roof of the 123-story Lotte World Tower, Korea’s largest building and the fifth tallest in the world, is a complicated and highly uncomfortable job. Fireworks are explosives and are treated as a type of firearm by police. They have to be checked by police when they enter Seoul. At dawn on Wednesday, 4,000 firework tubes were delivered from a storage facility in Changnyeong, South Gyeongsang. If the team failed to install them all, the remainder would have to be returned to Changnyeong.

The installation work is slow and cold. Precision is key. The fireworks are installed in different locations and have to be aligned so they form the right patterns when they go off. If one launches in the wrong direction it can break the flow of the performance.

BSB assigned 50 technicians to the project. This week, they worked a nine-to-five schedule for five days. But finishing the job by the deadline of Dec. 31 is far from easy. Work stops when it rains or when the wind picks up. Technicians are 500 meters above ground and dropping the smallest tool can lead to major damage below. Roads need to be blocked when work is being done above them.

“There were concerns about a fireworks performance in the winter but the show became sort of a local festival after the one in April for the Lotte World Tower opening attracted one million people,” said Choi Young, public relations head of Lotte Property & Development.