Old masters and new voices in 2018 : Retrospectives will revisit pioneers in Korean art, and biennales will explore our uncertain future

Old masters and new voices in 2018 : Retrospectives will revisit pioneers in Korean art, and biennales will explore our uncertain future 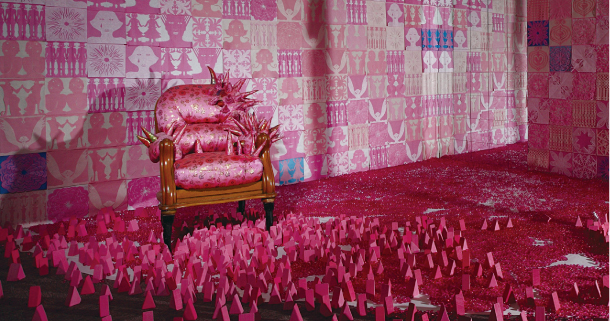 The Hakgojae Gallery will host a solo exhibition featuring Yun Suknam, 78, one of Korea’s earliest feminist artists and a member of the minjung, or “people’s art,” movement. The show will include the installation “Pink Room,” above, which was much acclaimed by foreign curators, according to the gallery. [HAKGOJAE GALLERY]

With a new year starting, major museums including the National Museum of Modern and Contemporary Art (MMCA) and Seoul Museum of Art (SeMA) as well as leading galleries like Kukje and Hyundai have unveiled their exhibition lineups for 2018.

Among them are retrospectives rediscovering female artists and group shows analyzing the digital era from a sociopolitical perspective. There will also be major biennales including one in Gwangju. Here are some highlights selected by the Korea JoongAng Daily from exhibition timetables and arranged chronologically.

A new museum occupying the seventh floor of the Lotte World Tower, the world’s fifth-tallest building, in southern Seoul, will open this month. The inaugural exhibition will be a retrospective of American minimalist artist Dan Flavin (1933-96). His most famous pieces are ready-made sculptures and installations made with commercial objects like fluorescent light tubes.

A large-scale retrospective of Jung Kang-ja (1942-2017), one of few female pioneers in Korean avant-garde performance art, will display about 60 paintings and sculptures from the artist as well as archives of her performances. Jung passed away from cancer last year.

Belgian artist Wim Delvoye will hold his first solo exhibition in Korea this year. The 52-year-old iconoclast, often called a “neo-conceptual artist,” is known for works that combine contradicting elements like car tires elaborately hand-carved with classic patterns and “marble floors” made of ham.

A retrospective of Rhee Seundja (1918-2009), part of the first generation of Korean abstract artists active in Paris, will be held to celebrate her 100th birthday. She was one of few Korean female artists of her time.

The portraits of various artists and writers by Korean photographers, and related archives, will be on display at this peculiarly named show.

Korean artist Chun Kwang Young will show his latest pieces in this solo exhibition. Chun, 73, is famous for sculptures and reliefs with unique textures that he forms from numerous small shapes wrapped in mulberry paper.

This exhibition will feature interpretations of social and cultural trends by artists mainly born in the 1980s, who grew up without computers and entered adulthood with smartphones. The pieces straddle the border between the virtual and real.

This solo exhibition of Akram Zaatari, a 51-year-old Lebanese artist, will feature his work based on the collection, study and archiving of photographic history in the Arab World.

Dutch designer Joris Laarman will hold his first solo exhibition in six years at the Kukje Gallery. The 38-year-old is best known for his organic furniture made with computer algorithms that simulate the growth of human bones. In recent years, he has focused on his “MX3D” Bridge Project, using a robot to 3-D print a bridge.

Roni Horn is one of the world’s most influential contemporary artists, known for his sculptures, drawings, photography and writing. The Kukje Gallery will host a solo show for the 62-year-old artist.

Kang Yo-bae is part of the first generation of minjung artists. Their work, which translates to “the people’s art” in Korea, contained elements of social realism and reacted to the military regime of the 1980s.

Based on Jeju Island, Kang, 65, is famous for his landscape paintings and pieces alluding to the hard life of people living there. In this solo show, he will unveil new paintings about the 1948 Jeju uprising, when thousands died protesting the American military presence in South Korea.

Sa Suk-won, 57, is one of the best-selling painters in the Korean market. His solo exhibition will include the artist’s signature paintings that use bright oils commonly found in Western art and brush strokes in calligraphic style often seen in traditional East Asian art.

To celebrate the museum’s 30th anniversary, the SeMA will pick out 30 representative artworks from its collection and commission young artists to create digital pieces related to the collection in various contexts. The results will be displayed together with the originals.

Yiso Bahc (1957-2004) is considered a pioneer in conceptual art, credited with introducing the concept of postmodernism to Korea in the early 1990s. The show at the MMCA in Gwacheon will be a retrospective of his work.

This retrospective of French-American sculptor, painter, and filmmaker Niki de Saint Phalle (1930-2002) will feature more than 120 of her pieces. The show will focus on the monumental colorful sculptures she created in her later years.

This exhibition of minhwa, or folk paintings, created by many anonymous artists during the Joseon Dynasty (1392-1910) will celebrate the 30th anniversary of the Seoul Arts Center. In particular, there will be many examples of munjado, paintings of Chinese letters that contain symbolic images related to the characters.

This exhibition will feature work that deconstructs and reconstructs news content. 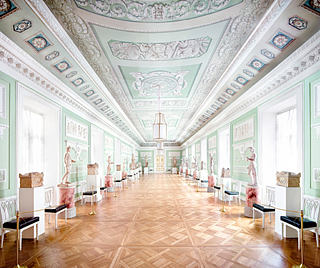 German photographer Candida Hofer, 73, is one of the world’s most influential artists belonging to the Dusseldorf school of photography. Korean viewers will have a chance to see Hofer’s work in her first solo show in seven years in Korea. Hofer is best known for her grand color photographs of unpopulated spaces inside museums, libraries and opera houses.

Yun Hyong-keun (1928-2007) is one of the most famous artists in the movement known as dansaekhwa (Korean monochrome paintings). The retrospective will feature his abstract paintings including the “Umber Blue” series, for which he is best known. These pieces straddle the border between East Asian ink paintings and Western oil paintings.

In this solo exhibition, Yun Suknam, 78, one of the earliest Korean feminist artists and a minjung artist, will present her latest work including the installation “Pink Room” which was much acclaimed by foreign curators, according to the gallery. She is best known for her wooden sculptures decorated with paintings that depict women forgotten in the history as well as other minorities in society and abandoned dogs.

This 10th edition of the biennial exhibition will focus on new media pieces with heavy sociopolitical tones.

Asia Culture Center and other venues

The 12th edition of the Gwangju Biennale, one of the biggest biennial art events in Asia, will have seven major exhibitions by 11 curators. The theme is “Imagined Borders,” borrowed from political scientist Benedict Anderson’s phrase “imagined communities,” which he used to explain the origins of nationalism and geopolitical borders. The Gwangju Biennale will focus on new borders that are being created and hardening between generations, economic classes and others in people’s everyday lives.

A rare local retrospective of French artist Marcel Duchamp (1887-1968), regarded as one of the earliest pioneers of conceptual art and a hero for many contemporary artists, will take place at the MMCA in Seoul. Perhaps his most famous work is the 1917 ready-made “Fountain,” in which he displayed a urinal upside-down with the signature “R.Mutt” at photographer Alfred Stieglitz’s studio.

The MMCA has yet to reveal many details about the Duchamp exhibition, but one of his famous “Box in a Valise” pieces containing miniature reproductions of his own work will likely be displayed because it is part of the museum’s collection.