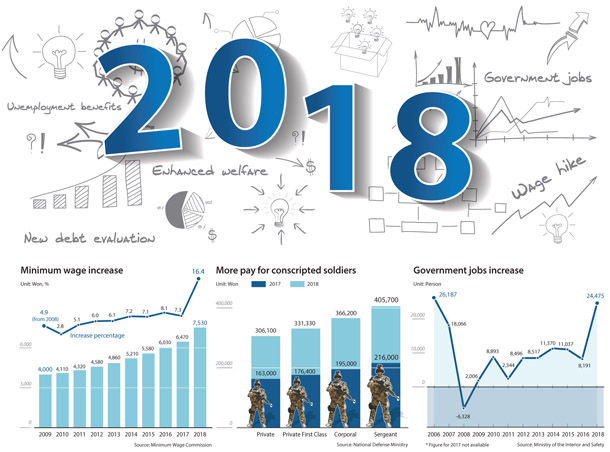 In 2018, a wide range of changes to economic policy will affect the everyday lives of many. Below are the most significant changes coming in the weeks and months ahead.

The 1,060-won hike is part of the Moon Jae-in government’s longer term ambition to raise the minimum hourly wage to 10,000 won by 2020. If an employee works eight hours a day and five days a week, he or she will make 1.57 million won per month this year.

To help businesses pay higher wages, the government will provide a subsidy of 130,000 won per month to every worker in businesses that employ fewer than 30 workers and pay them less than 1.9 million won a month.

While the government pushed ahead with the largest-ever minimum wage hike despite opposition from business groups and opposition parties, it remains to be seen whether it can get it up to 10,000 won in the next three years.

People participating in reserve training will also see a 50 percent boost in pay. Reserved forces will make 15,000 won for each day of training from the 10,000 won they received last year.

In an attempt to pare down the mountain of household debt - which stood at 1,388 trillion won as of the first half of last year, up from 1,085.3 trillion won from 2014 - the government will implement a new total debt service ratio (DSR) during the second half of 2018.

The DSR will be calculated for people applying for mortgages. It compares their income with all debt, including the mortgage they are applying for, plus existing loans including unsecured loans and even monthly car payments.

Under the current system, banks only calculated the principle on the mortgage being applied for and interest payments on other mortgages. The new ratio will be tougher and, presumably, reduce the number of mortgages issued.

Starting from July, unemployment benefits will increase for the first time in 22 years. Under the government plan, benefits will rise to 60 percent of what an unemployed person earned previously, up from the current 50 percent. Benefits will be calculated by looking into the average monthly earning of the person during the last three months of his or her previous employment.

The maximum coverage period will also be expanded to 270 days from the current 240 days. For unemployed under 30 years old, benefits will continue for 240 days. Previously, they only went for 180 days.

Couples who have children under the age of six will receive 100,000 won per child every month in a subsidy, except for people in the top 10 percent income bracket. The new subsidy, intended to encourage couples to have children, will begin in September. The ceiling on monthly maternity-leave payments will be increased to 1.6 million, up from 600,000 won.

People aged 65 and older will see an increase in their basic pension benefits to 250,000 won from the previous 200,000 won. The benefits go into effect in September for people in the bottom 70 percent income bracket. With Korean society rapidly aging, the number of beneficiaries is expected to increase to 5.16 million this year from last year’s 4.75 million. By 2021, the government estimates close to 6 million will be entitled to such payments.

People who have been employed less than 12 months will be eligible for 11 days of paid leave during their first year at work, starting from June. Previously, a 15-day paid leave was offered to employees in their second year on the job; if a new worker wanted a vacation in his or her first year, he or she had to deduct it from the 15 days of paid leave for the following year.

Workers injured on the way to or from work will be covered, starting from Jan. 1, by industrial accident compensation insurance, no matter what type of vehicle they were in. Previously, workers were only covered when they were injured riding vehicles provided by company. Now they are insured even on public transportation.