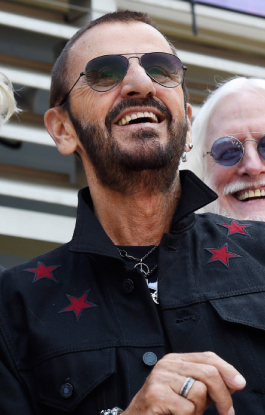 LONDON - A Beatle and a Bee Gee are among the celebrated citizens who have been selected for knighthood and other awards given in the name of Britain’s monarch.

Britain’s Cabinet Office publishes a list of the people receiving honors for merit, service or bravery twice a year: just before New Year’s Eve, and on the Saturday in June when Queen Elizabeth II’s birthday is officially observed.

The New Year’s Honors List made public late Friday revealed that Beatles drummer Ringo Starr and Barry Gibb, the oldest and last surviving of the brothers who made up the pop group the Bee Gees, have been tapped as knights.

The process starts with nominations from the public, which first are reviewed by a specialist committee and then by a main honors committee. The nominations are then sent to the prime minister before the various honors are bestowed by the queen or senior royals.

The children’s author celebrated for “War Horse,” a politician who fought in vain to keep Britain in the European Union, and many others, including renowned researchers, volunteers and actors, also made the honors list.

Ringo Starr, drummer for one of the most famous bands in the history of recorded music, missed the Beatles’ hardscrabble years, when they had to scramble for a gig to get by, joining John Lennon, Paul McCartney and George Harrison just before they rocketed to stardom.

There were flashier drummers in the rock pantheon - Keith Moon and Ginger Baker come to mind - but Starr fit the band’s approach perfectly, playing with uncanny style and imagination as the band’s music branched out from its early American rock influences. The drum parts in “Ticket to Ride,” “Rain,” and “Strawberry Fields Forever” are all seen as masterful contributions to timeless songs.

Starr also had a way of mangling words that pleased Lennon, who used Starr’s offhand quips to develop the songs “A Hard Day’s Night” and “Tomorrow Never Knows.”

“It’s great!” Starr said of his knighthood in a brief message Friday. “It’s an honor and a pleasure to be considered and acknowledged for my music and my charity work, both of which I love. Peace and love. Ringo.”

He has enjoyed a successful solo recording career since the Beatles broke up in 1970 and continues to tour with a shifting ensemble known as Ringo Starr & His All Starr Band. Each show features a performance of “With a Little Help from My Friends,” his signature song from the Sgt. Pepper album.

“I want to acknowledge how responsible my brothers are for this honor,” said Gibb, 71. “It is as much theirs as it is mine.”

He was recognized for services to music and charity.

“This is a moment in life to be treasured and never forgotten,” he said.

The Bee Gees formed in the late 1950s and enjoyed two distinct periods of commercial success: first as a Beatles-influenced pop band and later as leading avatars of the disco movement, particularly on the “Saturday Night Fever” soundtrack that achieved global fame.