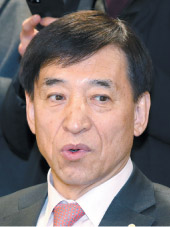 Bank of Korea Governor Lee Ju-yeol on Sunday said the central bank will likely maintain a loose monetary policy for the time being amid concerns over the Korean economy as it faces challenges from global trade protectionism, geopolitical tensions and a rapidly aging society.

“We will make cautious decisions on the readjustment of monetary policies after closely monitoring the financial stability situation including future growth and inflation,” Lee said in his New Year’s statement.

The BOK for the first time in nearly six and a half years tightened the nation’s key policy rate from an all-time record low of 1.25 percent to 1.5 percent in November at the last monetary policy committee meeting of the year.

The move came at a time when there were growing expectations of the United States tightening its own monetary policy, which it did in December while projecting three more additional hikes this year.

With Lee’s New Year’s statement, it is likely that the Korean central bank will hold the key rate at the current 1.5 percent for the next couple of months. Lee’s four-year term as head of the country’s central bank ends in March.

The BOK governor said that until last year the loose monetary policy has made a huge contribution in the nation’s growth despite facing major obstacles including the worsening trade environment with major partners including China and the U.S. as well as heightening geopolitical tensions with Pyongyang resulting from repeated missile and nuclear bomb tests.

He said 2018 should be an opportunity for the Korean economy to attempt a major reform to secure sustainable future growth.

“For the Korean economy to advance a step further we need to continue working on reforms that improve our economic fundamentals and secure growth potentials,” Lee said. “This is the most appropriate time to pursue reform as the nation’s growth is in recovery and fiscal spending is expanding,” the governor said, while adding that both the government and private sector need to cooperate to not miss out on this opportunity.

The governor also noted the danger of cryptocurrencies, which have become a major issue in recent months.

“There should be efforts to find measures against cryptocurrencies, which are showing signs of overheating in the global market, and have the potential to turn into a threat to financial stability,” Lee said.