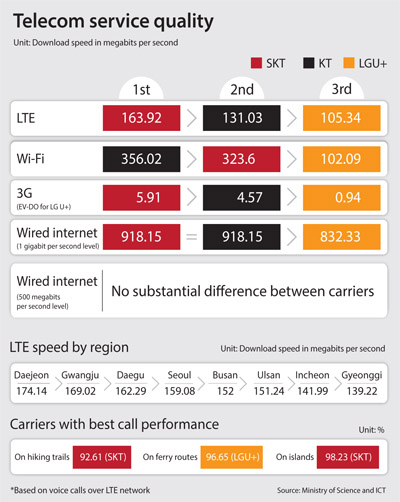 If you’re hiking, SK Telecom will provide the best phone service, but on a boat, your best bet is LG U+.

These were some of the findings from the government’s annual report card of telecom companies’ mobile networks. Korea’s largest carrier, SK Telecom, beat out smaller carriers in both 3G and LTE, while KT demonstrated a competitive edge in Wi-Fi.

The report card was released last week by the Ministry of Science and ICT and the National Information Society Agency after a four-month assessment of network quality. The report includes comparisons of data speeds among different carriers and regions.

Last year, the government omitted information about specific carriers, but after public outcry, the ministry brought back the company-by-company assessment.

This means a typical SK subscriber can expect to download a 1-gigabyte movie in 50 seconds, while KT users require 62 seconds and LG U+ users 77 seconds.

SK Telecom has been the top operator of high-speed LTE for four straight years, except for last year, when internet speed comparisons by carrier were not released.

“Massive investment and technological developments have helped us excel in quality despite allocating the smallest amount of spectrum per person,” an SK representative said. “From December last year, we have been working on more effective ways to manage our telecommunications network, such as employing artificial intelligence for network management.”

In 3G, SK Telecom once again had the fastest connection, followed by KT and LG U+. LG U+, however, said the comparison was unfair because the carrier was evaluated on its so-called evolution data-only network, which is categorized as 2.5G. The technical standards, the company said, were incompatible.

The ministry also compared LTE speeds by region and found there was great discrepancy between cities in Korea.

The regions with the slowest LTE networks were the rustic provinces of South Chungcheong and South Gyeongsang. In these rural areas, the average download speed on LTE was 63 percent the speed of urban areas.

“Korea’s LTE speed is outstanding compared to world standards, but we still need to work on reducing the gap between cities and villages,” said Jeon Sung-bae, a director of telecommunications policies at the Ministry of Science and ICT. “In some areas, the network quality needs to improve substantially.”

The quality difference between the telecom companies’ secure Wi-Fi for subscribers and free public Wi-Fi was subtle.

Last year, the government decided to exclude carrier-specific data in their assessment, arguing that LTE speeds had reached a point where “comparisons by carrier have become meaningless.”

“It might even bring about overinvestment by carriers out of competition,” the ministry said.

But after companies and consumer rights groups complained that the telecom data was meaningless without carrier-specific information, the ministry decided to disclose the data this year.

“From next year, we will expand device and user samples,” Jeon said, “and add more valuation criteria to offer diversified assessment results.”