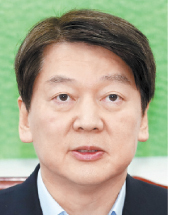 About three-quarters of People’s Party members supported their leader Ahn Cheol-soo’s push for a merger with the conservative Bareun Party in polls conducted last week.

Results from the four-day survey of members released Sunday showed 74.6 percent favored a merger between the two minor opposition parties, a move in which Ahn has staked his position as leader of his center-left party. About 25.4 percent voted against, and turnout was at 23 percent.

“I will take it as a wish for change heading toward a path of merger,” Ahn said during a news conference Sunday. “The path we are trying to head toward is one of a reformist party,” which he said was in line with the “democratic spirit of Honam,” referring to the southwestern region of Korea that has traditionally voted left.

On Dec. 20, Ahn proposed an intraparty vote on a merger with the Bareun Party, a move that faced vehement opposition from key members of the center-left People’s Party, particularly from the Honam region.

“There are those within the party who counter whether we have to hold hands with the Bareun Party,” Ahn said, addressing factionalism within the People’s Party.

“A merger between the People’s Party and Baruen Party will pose a threat to the [ruling] Democratic Party and [main opposition] Liberty Korea Party,” pointing to efforts by both of the major parties to block their merger.

Yoo Seong-min, head of the Bareun Party, welcomed the results of the poll and said in a statement Sunday, “The People’s Party members’ intention of merging with the Bareun Party, and their confidence in Chairman Ahn Cheol-soo, has been made clear.”

“There have been conflicting views in the People’s Party between those for and against a merger,” he said. “Through the party members’ vote, I look forward to seeing a political agreement reached for consolidation.”

The Bareun Party has already agreed to a merger with the People’s Party, and with the recent vote, the two could speed along their consolidation.

Still, People’s Party members who oppose the plan can stall the merger through formal procedures at the party’s convention.

They argue that the 23 percent turnout was an indication that a majority of party members are actually opposed to a merger with Bareun.

The People’s Party has about 264,000 eligible voting members, but only 59,900 people participated in the online and phone poll that ran from Wednesday to Saturday.

A vehement critic of the merger, Park Jie-won, a Honam native and former head of the People’s Party, called Ahn’s remarks at the conference the “height of impudence.”

In a statement posted on Facebook after the news conference, Park wrote that the turnout “did not meet the legal requirement of one-third, or 33 percent, and to try to legitimize a 23 percent polling turnout .?.?. is comedic.”

Ahn, however, asserted that the near 75 percent approval among those who voted left no room for conflict.

“Chairman Ahn should immediately halt a merger with the Bareun Party,” he wrote, “and step down as our leader.”

An unidentified man infiltrated the People’s Party headquarters in Yeouido, western Seoul, on Sunday as Rep. Lee Dong-sup was announcing the result of the poll and tried to attack the lawmaker.

He was restrained by other party members as he hurled a string of expletives at Lee.