As the world’s top racer, the Jinju native has a real shot at gold

As the world’s top racer, the Jinju native has a real shot at gold 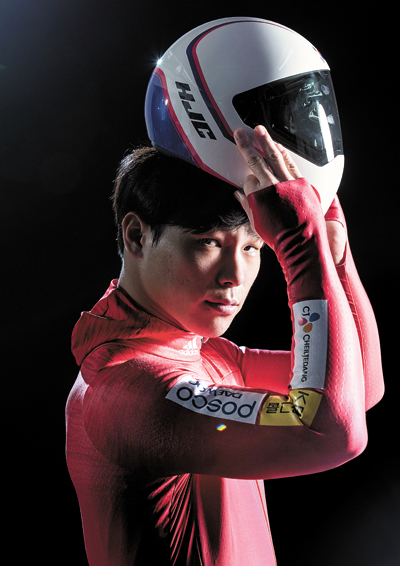 At the Winter Olympics, Korea has only won medals in short-track speed skating and figure skating, but in Pyeongchang, Yun Sung-bin hopes to add skeleton to the list.

Yun first encountered skeleton while attending high school in 2012. After three months of training, he won the national championship in September 2012 and made his international debut in the 2012-13 season.

When Yun first started competing internationally, he was ranked 70th. Now, he is the best skeleton racer in the world.

“Just like how people my age graduated college writing resumes, I’m challenging myself to make my dreams come true,” Yun said. “I hope my achievements can motivate other people.”

Yun is hoping to make 2018 his best year yet by traveling around the world and competing in BMW International Bobsleigh & Skeleton Federation (IBSF) World Cup races as preparation for the PyeongChang Games.

The season for winter sports normally starts in the fall and ends in the spring, carrying over to the following year, meaning this season is considered the “Olympic season.”

In skeleton, where an athlete has to race down an icy track of 1,500 meters (0.93 miles) on a sled facing down, there has never been an Asian racer that won a medal at the Olympics. Yun hopes to be the first.

To prepare, the 23-year-old native of Jinju, South Gyeongsang, is keeping in tip-top shape before the Games. Of the five World Cup races he has competed in so far, Yun has won three and finished runner-up in two. The three victories allowed him to top the World Cup ranking in men’s skeleton this season, with 1,095 points.

Though he may be dominant in the IBSF this season, leading by almost 50 points ahead of the runner-up, he will undoubtedly have to compete against Martins Dukurs, a power racer who has won a total of 50 World Cup races throughout his career.

“By starting to get aware of others, it can affect my race,” Yun said. “I just need to do well in what I need to do.”

Despite having home track advantage, Yun finished runner-up last season after losing to Dukurs by 0.01 second in the final World Cup race at the Alpensia Sliding Centre in Pyeongchang in March.

This season, though, Yun has not only won three consecutive World Cup races, but during one event in Whistler, Canada, in November, Yun set a new record at the Whistler Track with a 51.99-second finish.

Among skeleton racers, Yun is known as “Iron Man” for wearing the character’s iconic helmet. “Iron Man represents me and is like a hero to me,” he said.

Despite Yun’s short career in skeleton, the Olympics in Pyeongchang will not be his first. He previously competed in Sochi, Russia, in 2014, finishing 16th. At the time, he was considered a rising rookie from runner-up finishes at the Intercontinental Cup and North American Cup. Although Yun’s result in Sochi wasn’t as good as his results in previous events, the 16th-place finish was the best result in Korean skeleton history.

After returning to Korea, Yun tattooed the Olympic flag on his left forearm as a reminder to perform at Pyeongchang. Unlike last time, where he was barely given any support, the Korean national skeleton and bobsled team has provided him with a full coaching staff, including Lee Yong, who has been with Yun since he first joined the national team, and foreign coaches.

“I wouldn’t have gotten this far if they weren’t here,” Yun said. “I’ll have to do well at the PyeongChang Olympics even to repay them.”

The four skeleton races of the Winter Olympics will run across two days on Feb. 15 and 16, in the midst of Lunar New Year festivities.