FC Seoul has angered fans by parting ways with Dejan Damjanovic, the club’s top player for the past eight seasons. 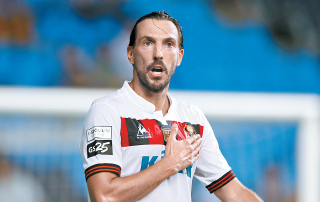 Dejan made his K League debut with Incheon United in 2007 and signed with Seoul on Dec. 7 that year. Though he spent two years in the Chinese Super League, Dejan has played for Seoul for a total of eight seasons, leading Seoul to K League victory and the 2013 Asian Football Confederation (AFC) Champions League final.

In 2012, Dejan scored 31 goals in a single season, and from 2011 to 2013, he won the league scoring title for three consecutive seasons. Dejan’s 31 goals in 2012 were good enough to secure him the MVP award. In addition, Dejan also tied the record for the most hat tricks, at six. Once Dejan returned to Seoul after two seasons in the Chinese Super League, he still managed to record double digits on his scorecard, with 13 goals in 2016 and 19 in 2017.

Though they anticipated a backlash, Seoul decided to let Dejan go for the future of the club. While there is no doubt that he is Seoul’s best player, after a disastrous 2017 season it was time to make some changes.

In an attempt to recover their former form, Seoul is hoping that a generational change might help the squad climb back into the AFC Champions League spots.

Entering his mid-30s, Dejan showed less explosiveness in his playing compared to the 2012 season. As he will turn 37 in 2018, Seoul was given no choice but to release him to meet the club’s goal of building a younger team. The signing fees may also have been too much for the club, as he is the second highest-paid player in the league at 1.345 billion won ($1.26 million).

Since there are only limited spots available for foreign players in the K League, Dejan may have easily re-signed with Seoul if he wasn’t a foreign player. Each club is given three spots for foreign players that are not from Asia. Due to this, Seoul had to let go of the legendary player in order to make full use of the limited places.

Dejan is now in process of negotiating with other K League teams. As his agent has started negotiating with Suwon Samsung Bluewings, it is likely that the 36 year-old forward will don the Suwon uniform, Seoul’s biggest rival.

Since Suwon lost their top striker, Johnathan Aparecido da Silva, commonly known as Johnathan, to Chinese Super League’s Tianjin TEDA, they are in need of a new striker. Considering Dejan’s performance in matches against Suwon, scoring a total of seven goals, the veteran striker is a favorable option.

For Seoul, they need to prove that their decision was right. It is important for the club to find the right foreign player and that he meets expectations, while Dejan needs to prove that Seoul’s decision to release him was wrong in the 2018 season.