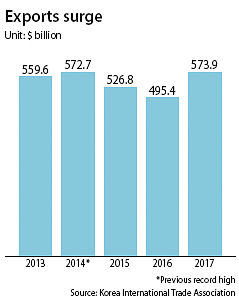 Outbound shipments from Korea in 2017 totaled $573.9 billion, up 15.8 percent from 2016, an all-time high since the government began tracking the data in 1956, according to the Ministry of Trade, Industry and Energy.

“Due to demand for memory chips and a rise in prices, semiconductor exports surged by 57.4 percent,” the ministry said in a report released Monday. “It is the first time that a single item’s exports surpassed $90 billion, which hovers well above the country’s entire exports in 1994 [which totalled $96.01 billion].”

Shipment of high-value products such as multichip packages (MCPs), which are used in high-end cellphones, and SSDs, which are used in laptops, also saw drastic increases in 2017. Exports of MCPs rose 47.5 percent from a year ago to post $23.01 billion, pushed up by an increase in big data related services globally as well as an increase in demand for electronic devices with higher storage capacities.

For petrochemical products, the increase in global oil prices this year as well as local companies expanding production capacity at their plants accounted for the drastic hike.

Export categories that saw decreases included mobile communication devices and electronics due to an expansion in overseas production and intensified global competition, the trade ministry data indicated. Auto parts also retreated by nearly 10 percent, hit by a fall in shipments to China due to the political row between Beijing and Seoul over the deployment of a U.S. anti-missile system.

By region, shipments to all major destinations excluding the Middle East climbed. Export destinations also diversified somewhat, with the share of Korean exports to China and the United States falling from 25.1 percent to 24.8 percent and 13.4 percent to 12.0 percent, respectively.

The outlook for 2018 is optimistic, according to the government.

In the report, the trade ministry predicted a four percent increase in exports this year, citing positive forecasts for displays and memory chip exports.

“The global economy [will stay healthy] and a rise in trade is likely to continue this year,” said Paik Un-gyu, the trade minister, who visited Incheon International Airport’s cargo terminal on Monday. “However, there are potential risk factors, including instability in the financial markets as major economies normalize their monetary policies and increasing trade protectionism across the globe.”

“The government will focus its policy on maintaining export growth and attaining an over four percent growth rate.”