From broke undergrad to blockchain boss

From broke undergrad to blockchain boss 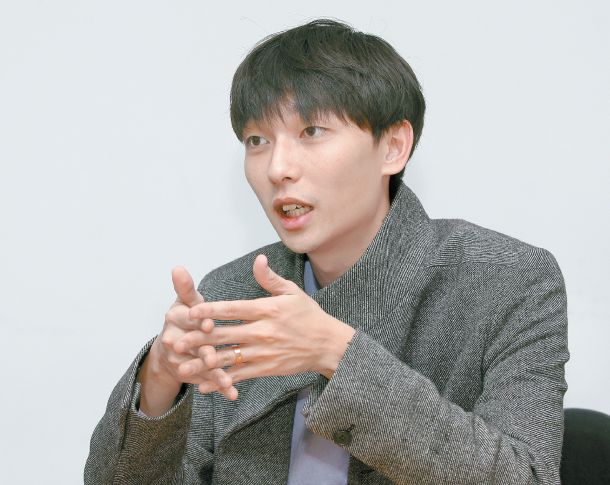 Simon Yu, chief executive of blockchain venture StormX, talks about his company and cryptocurrency fever in Korea during an interview on Dec. 11 in Seoul. [PARK SANG-MOON]

Before Simon Yu embarked on his blockchain venture StormX, he was a down-on-his luck college student running a catering service out of his apartment.

The Korean-American from Seattle was attending the University of Washington when his family declared bankruptcy. To make ends meet, he began delivering meals to his fellow students, and the venture, which started with a $100 loan, eventually became a $1 million food truck business. It was Yu’s first taste of entrepreneurship.

Now Yu, 26, is chief executive of StormX, a blockchain company he co-founded with software developer Calvin Hsieh. The idea behind the company is novel: to provide a payment platform for employers of freelancers using blockchain, a network of secure ledgers that cannot be manipulated. The two recently raised $32 million through an initial coin offering of its own cryptocurrency Storm Token in early December, which the freelancers are paid in. 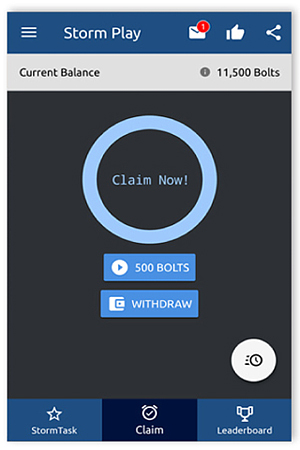 Screenshot of Storm Play, an app from StormX that rewards users with bitcoin and Ethereum for trying new products. [SCREEN CAPTURE]

StormX is the latest endeavor in a string of global blockchain ventures started by Koreans. Before Yu, there was ICON, a cryptocurrency that is currently 23rd in the world in terms of market cap according to CoinMarketCap. Stellar, the 10th largest by market cap, was co-developed by Joyce Kim, a Korean-American, and Jed McCaleb, founder of the peer-to-peer file sharing service eDonkey.

“I first came across bitcoin while working at a bank after college,” said Yu, who also has an internship experience at Amazon under his belt.

His journey with blockchain began with CakeCodes, a start-up that operates BitMaker. BitMaker is an app that rewards users with bitcoin and Ethereum for trying new products. One of its partnerships was with Uber. If a BitMaker user tries Uber for the first time, the app rewards him or her with bitcoin and Ethereum, incentivizing them to try out products from Yu’s partner companies. BitMaker currently has about 300,000 users worldwide.

After the success of BitMaker, Yu and Hsieh founded StormX and folded BitMaker into the new company, rebranding it as Storm Play. The ambition of linking employers and freelancers through blockchain payments attracted nearly 10,000 investors from around 140 countries who joined StormX’s initial coin offering. Notable investors include Anthony Diiorio, co-founder of Ethereum, who joined the advisory board.

Investors from Korea also climbed onboard. Hashed, a cryptocurrency investment firm, committed 1.5 billion won ($1.4 million). Kim Seo-joon, chief executive of Hashed and co-founder of Knowre, an education technology company based in Seoul and New York, cited Yu’s work ethic and personal charm as one of the reasons behind his decision to invest in StormX.

In an interview with the Korea JoongAng Daily during a brief visit to Korea to meet with local investors on Dec. 11, Yu, who also goes by his Korean name Yu Byung-hoon, discussed his vision for StormX, his observations of the Korean cryptocurrency market and how it could ultimately benefit the local economy. Below are edited excerpts from the interview. 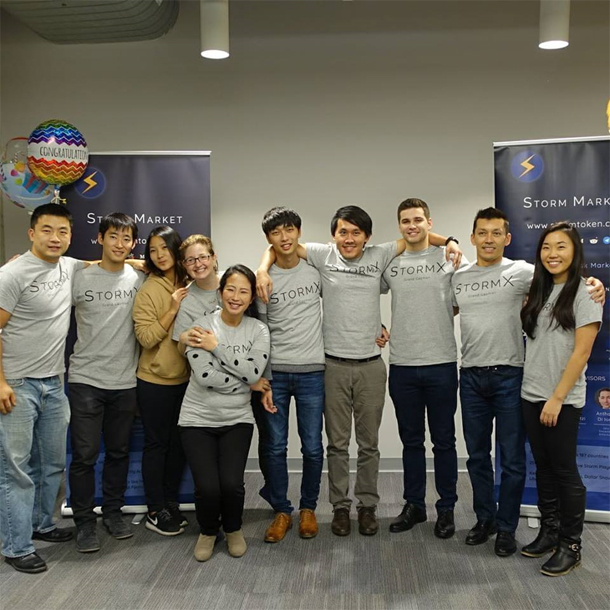 Simon Yu, sixth from left, and his team at StormX recently raised ＄32 million through an initial coin offering. The company hopes to provide an efficient link between freelancers and employers using blockchain technology. [STORMX]

Q. What compelled you to start a blockchain company?

A. While working for a bank, I realized how inefficient the banking system was due to steep fees and slow transaction speeds. But blockchain technology can essentially change that. When you outsource jobs globally, there are a number of different transaction fees that follow when you do it through fiat currency. StormX is trying to eliminate such fees by using Ethereum and off-block transactions simultaneously. There are big projects out there to build a completely new blockchain system, but what we concentrate on is the user experience, trying to solve everyday problems such as high transaction fees by utilizing available systems.

When the computer was first developed, it wasn’t until the emergence of components like monitors and keyboards that people were able to really benefit from the technology. Similarly, while blockchain is largely seen as something you buy and sell at exchanges right now, we can make it truly beneficial for everyone if we make it easily accessible to the general public.

What problems are you ultimately trying to solve?

We are ultimately trying to eradicate inefficiencies in the freelancing market. Experts say that by 2020, 40 percent of the global workforce will work remotely off their laptops instead of in designated offices, whether part time or full time. Even for us in our development stage, some of our developers are in Brazil and our customer service is in the Philippines. This outsourcing is costly when you do it through fiat currency. We have to make payments of as little as a few cents for certain jobs that we call “micro-tasks,” and if we relied on traditional payment systems, transaction fees would be too high for the outsourcing to make sense. We want to connect employers and employees, and do so by providing blockchain-based payment solutions.

Why specifically the job market?

I believe that by incorporating blockchain technology into the job market, we can create a model that bypasses traditional systems to cut transaction costs and streamline the payment process.

What do you mean by focusing on the user experience?

In the initial stage, we will mainly focus on expediting transactions, lowering fees and expanding the job market so that employers can hire from the global stage by using blockchain.

The next step is “gamification of micro-tasks.” People enjoy playing games because there are elements in games that show the more time you invest, the better or more rewards you get. Game designers create a metric system that takes playing time and level of difficulty into consideration when they develop a game.

Similarly, I think more people will commit themselves to tasks that may seem tedious, such as data entry, if they receive conspicuous rewards. We are trying to create a credit system where essentially you get points by doing more of a single task. The more points you have, the higher fees you can charge. Employers can use the points that a worker has accumulated as a reference of skill level and be willing to pay more bucks. This gives psychological motivation for freelancers.

When Koreans hear blockchain, they often only think of cryptocurrency investment. Do you believe this is the wrong notion?

I think the opposite. Because of the boom, more people are taking interest in what’s actually behind the coins and their prices. I think the hype that we saw this year is good news for the blockchain industry. There is an annual fintech conference called Money 20/20, and when I attended last year, no one understood me when I said I am involved in a blockchain start-up. Some people even equated bitcoin as a payment method for drugs.

But this year, an entire day in the three-day event was committed solely to blockchain. The fever in Korea may lean toward investment for now, but I think more blockchain developers will come out of the hype.

Government officials say coins and blockchain technology must be looked at separately. Is this correct?

Coins and tokens [assets created on top of another blockchain platform] are basically incentives for blockchain developers. They are an important part of the ecosystem of blockchain technology.

For instance, if you want to get involved in Steemit [a blogging and social media platform based on the Steem blockchain], you must hold tokens created by Steem to post and comment on content you find interesting. You don’t do it through fiat currency but do it through this designated, tradable asset you hold within that particular ecosystem. This can eliminate fees that come from currency exchange and other transactions, and since the price of a product is decided based on supply and demand, the popular Steemit gets, the more valuable the tokens become, incentivizing developers and Steemit token holders to further enhance their service.

How do you recommend the Korean government handle the situation?

I think we need established regulations in Korea. In the case of the United States, banking regulations, which have been there for centuries, were used as the foundation to regulate initial coin offerings. Without a set guideline and direction, developers will be confused every time something new pops out. I hope the Korean government’s prohibition of initial coin offerings is not permanent. ICOs are an important motivational tool for blockchain developers to commit their time and effort.

Do you think bitcoin is a bubble?

I don’t think it’s a bubble as a whole and I think it will stay bullish in the long term. When we think about the dot-com bubble, the market cap reached tens of trillions of dollars. Given that we are still in the billion-dollar range for cryptocurrency, I think we have a long way to go before it reaches its maximum cap. There could be short-term corrections in between, but it will continue to rise as the fundamental need will be there.