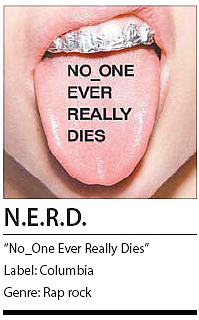 There’s a new N.E.R.D. album out, so it’s best to plan ahead: Carve out some time and be prepared to put in some work. N.E.R.D. albums are not passive things.

The 11-track “No_One Ever Really Dies’’ by the trio - Pharrell Williams, Chad Hugo and Shay Haley - is equal parts experimental, intriguing, frustrating and captivating. In other words, very true to its side-project DNA. Many of the songs don’t seem quite finished and some are completely overcooked. A few switch gears in mid-stream, as if the band was distracted by something else shiny in the studio. Many of the lyrics are whacky - until they get deadly serious.

It’s tempting to initially dismiss the whole thing as half-baked - or at least made while really baked. But there’s also great richness here, sometimes hiding in the layered swaths of upbeat synth, distorted sounds, and random electronic shards.

If most people stumble across “No_One Ever Really Dies’’ expecting an album full of songs like Williams’ hit “Happy,’’ they’ll be likely confused. But whoever sticks around and puts in some effort will find little jewels. AP