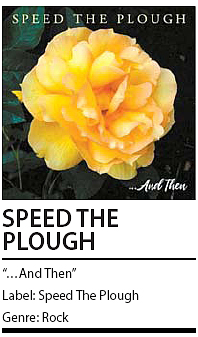 Part of New Jersey’s rich indie scene, Speed The Plough has a family tree deserving its own entry in any rock genealogy, with crisscrossing branches including The Feelies, The Trypes and Wild Carnation.

The band’s ninth album sees them revisiting a couple of Trypes tracks with the help of former bandmates like Feelies Glenn Mercer and Brenda Sauter, perform a pair of intriguing covers and even a track from the 1995 STP album “Marina.’’

Launching the album is the captivating “Crossing the Tisza,’’ a popular Hungarian folk song collected by Bela Bartok and Zoltan Kodaly in the early 1900s. Sung in English with Hungarian recitation by Anna Baumgartner (John’s mom), its hurdy-gurdy-like drone adds a further layer of authenticity. The other cover is of Brian Eno’s reflecting, lovely “By This River.’’

Among the originals, feelings of unresolved or unsettled relationships abound, while musical highlights include the crystalline guitar tones on “Take Me,’’ Toni Baumgartner’s clarinet (though her vocals are much more sincere than sturdy) and the kaleidoscopic “Why We Fall in Love.’’ AP