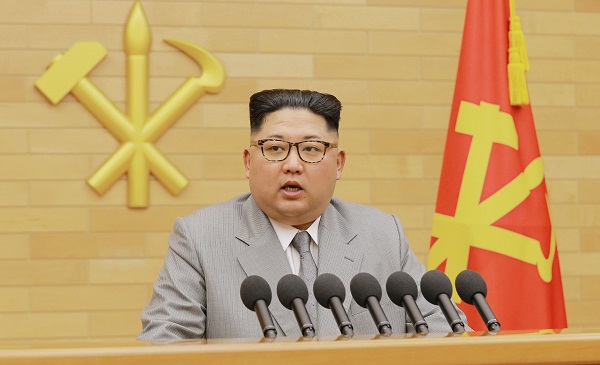 Kim Jong-un said he is willing to send a North Korean delegation to the upcoming PyeongChang Winter Olympics in a New Year’s address Monday, adding both Koreas “could urgently meet” to discuss the matter.

It was the first time Kim responded to Seoul’s repeated invitations to join the Olympics, set to kick off on Feb. 9 in South Korea’s northeastern towns of Pyeongchang, Gangneung and Jeongseon in Gangwon, just several miles from the inter-Korean border.

It was also the first time North Korea has been positive about talks with the Moon Jae-in administration, though it hasn’t responded to Moon’s earlier proposals to hold military talks and discuss a reunion of families separated by the 1950-53 Korean War, both offered last July.

The Blue House “welcomed” Kim’s overture in an official statement Monday afternoon, saying it has always been willing to talk with North Korea at any time or place as long as it was in regards to repairing inter-Korean relations or peace on the Korean Peninsula.

One major obstacle to full dialogue between Seoul and Pyongyang is the Trump administration, which has a policy of maximum pressure on North Korea.

The U.S. was mentioned 11 times in Kim’s 40-minute speech, mostly castigations of its North Korea policy and its “brandishing nuclear weapons to provoke war” on the Korean Peninsula.

Kim refrained from mentioning any conditions for North Korea’s participation in the Olympics or any inter-Korean talks, but alluded to the idea of Seoul calling off its annual military drills with Washington, the Key Resolve and Foal Eagle exercises, usually held every spring.
South Korea “must respond to our sincere effort to ease tension,” Kim said, adding Seoul must “halt all rehearsals for a nuclear war with outside forces and any acts that involves bringing U.S. nuclear equipment and aggression” to the peninsula.

After months of brushing off Pyongyang’s calls to abort the drills, highlighting their defensive and legitimate purpose, Moon said last month during an interview with NBC that he had asked Washington to consider delaying the exercises, adding the U.S. was “currently reviewing it” and that the result would hinge upon “how North Korea behaves.”

“If North Korea stops its provocations leading up to the PyeongChang Olympics, it will greatly help in holding a safe Olympics,” said Moon, continuing, “Also, it will help in creating a conducive atmosphere towards inter-Korean as well as U.S.-North Korea dialogue.”

The North hasn’t held any missile or nuclear test after that interview was given on Dec. 21 on a KTX bullet train from Seoul to Gangneung, one of the three sites of the winter games. Pyongyang’s most recent test was on Nov. 29, when it fired a new Hwasong-15 intercontinental ballistic missile into the East Sea.

South Korean and U.S. authorities admitted that if that missile was fired at a proper angle, it could target anywhere on the U.S. mainland, including Washington.

“The entire U.S. mainland is within the reach of our nuclear attack, and the nuclear button is always on my office desk,” Kim warned. The United States “shall squarely realize this isn’t a threat, but reality.”

The leader said “nothing could ever turn back our forceful and reliable” deterrence for war.