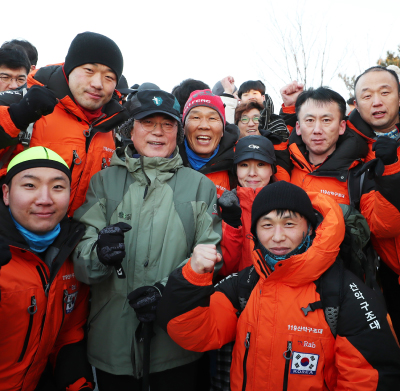 President Moon Jae-in, second from left in front, celebrates the New Year with mountain rescuers on Mount Bukhan Monday near the Samo Rock. Moon ascended the mountain with six people named “Righteous Person of 2017” for good deeds, hiking nearly three hours from Jongno District, central Seoul, to Samo Rock, after which they ate tteokguk (Korean rice cake soup) at Moon’s residence in the Blue House. After the hike, Moon had telephone conversations with officials working on the PyeongChang Winter Olympics, consul generals in Southeast Asia and U.S. soldiers stationed in South Korea. Today, Moon will hold a New Year’s meeting with senior government officials and the representatives of Samsung, Hyundai, SK and LG groups. [YONHAP]