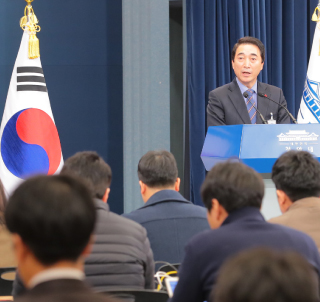 Presidential spokesman Park Soo-hyun announces President Moon Jae-in’s position on the results last December of a task force’s re-examination of the agreement between the Park Geun-hye administration and the Abe Shinzo government to close the chapter on the sex slave issue. [JOINT PRESS CORPS]

It’s been ten days since I was been assigned as a Tokyo correspondent for the second time. When I arrived at Haneda Airport late last month, I felt that Tokyo was completely different from Seoul.

I experienced omotenashi, or selfless hospitality, which is considered the hidden power of Japanese tourism, on my taxi ride to my office in Ginza. I had gotten used to the sound of radio and telephone conversations during taxi rides in Seoul. But the taxi ride in Japan was quiet, and the driver was hospitable as he helped with my three large bags. I thought it was worth the fare of 7,000 yen ($62).

But I am frustrated that I had to spend four hours at a telecom store to set up a mobile phone and internet in my office. The employee explaining policies to me must have been just as tired I was, but when he called his co-worker and confirmed his work twice, I could not help but sigh at his inflexible attitude.

After all, Japan is not entirely good or bad. There are things to learn from both the good examples and the bad.

Fatefully for a Tokyo correspondent, my duty began with the thorny issue of “comfort women,” which refers to the victims of the Japanese military’s sexual slavery. As expected, the Korea-Japan relationship was affected by President Moon Jae-in’s position on the results of a task force’s re-examination of the deal between Seoul and Tokyo in 2015. But the atmosphere in Japan was different from the past. The progressive newspapers that had rebuked the Japanese government’s lack of sincerity, the pro-Korean lawmakers who had advocated a good relationship with Korea and officials who had worked at the Japanese Embassy in Seoul all changed their tone. They said, “Who would negotiate with Korea if diplomatic agreements are made public?” and “Why bring domestic political issue to Japan? Should we conduct opinion polls on the Korean people every time Japan makes an agreement with Korea?”

They stressed the significance of agreements between two countries. When I reported this atmosphere in the newspaper, I was criticized. “You are one of them,” many Japanese netizens attacked me.

The Korean Peninsula is surrounded by four powerful countries. In a grave security crisis, the chief commander of diplomacy is the president. I believe that Moon’s view is different from what online critics claim. Instead of “definitely wrong and definitely right,” we need prudent and sharp calculations that it could be wrong, could be right, could be advantageous and could be disadvantageous. The president advocates diplomacy for the people, but I am worried that it could be “all or nothing” diplomacy that only a few people support.

*The author is head of the JoongAng Ilbo Japan.