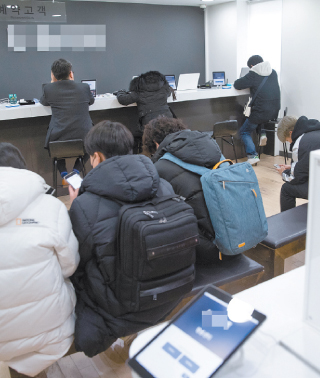 Customers wait for their iPhone battery to be replaced at an official Apple service center in Seoul. [YONHAP]

The company said in a statement on Dec. 28 that it would lower battery exchange prices from 100,000 won to 34,000 won for the iPhone 6, 6S, SE and 7, but did not specify when consumers can start requesting the replacement.

Owners of the iPhone were infuriated after Apple revealed on Dec. 20 that an iOS upgrade in the iPhone 6, 6S, SE and 7 reduces their processing power to prevent the devices from unexpectedly shutting down. Customers were unaware that the feature existed. Apple issued an apology and vowed to lower the price of an out-of-warranty iPhone battery replacement from $79 to $29 for all customers in late January, but started the service on Saturday in the United States.

On Tuesday morning Apple’s certified repair centers in Korea started receiving applications for the battery exchange. The replacements will be offered until December this year.

However, public outrage was far from eased and the number of applicants hoping to sue Apple kept on growing around the world.

Over 240,000 iPhone users in Korea have applied to join a lawsuit against Apple as of Tuesday according to Hannuri Law, a local firm taking on the case.

The number of potential plaintiffs has been growing rapidly after applications began last Thursday. The number of applicants reached 66,800 on Friday before tripling in just two days over the weekend.

Application will be taken until Jan. 11 for a formal lawsuit against Apple, and presumably Apple Korea, in February according to attorney Ku Hyun-ju from the Korean law firm.

The tech giant already faces at least eight lawsuits from iPhone owners in the United States and Israel, including a suit that seeks a whopping $999 billion in compensation from Apple filed at a court in California.

“iPhones are a luxury item, and can cost in excess of $1,000,” said Jan Saddler, a class action expert from Australian compensation law firm Shine Lawyers in a report Friday. “In a case such as this where Apple have admitted they misled their loyal customers, it is not unreasonable that class action members would be seeking compensation for the cost of their replacement phones.”

While Apple had already said in its apology that it has “never - and would never - do anything to intentionally shorten the life of any Apple product” industry experts say there are reasons why the apology doesn’t ring true with disappointed fans.

To start with, some say consumers just don’t understand why Apple implemented a software update that could slow down a phone’s performance.

“Consumers are feeling the absence of Apple’s innovative spirit, which they used to feel when Steve Jobs was alive,” said IT market analyst Park Yong-hu. “While Apple has always been a symbol of technological revolution, people are starting to have doubts.”

One of the biggest issues users have with Apple is the appearance that they intentionally kept the details of the update secret in the first place.

“If Apple had been upfront from the beginning, customers could have been more understanding,” said Professor Jung Ok-hyun of Sogang University’s department of electronic engineering.