Seoul asks for high-level talks with Pyongyang next Tuesday

Seoul asks for high-level talks with Pyongyang next Tuesday 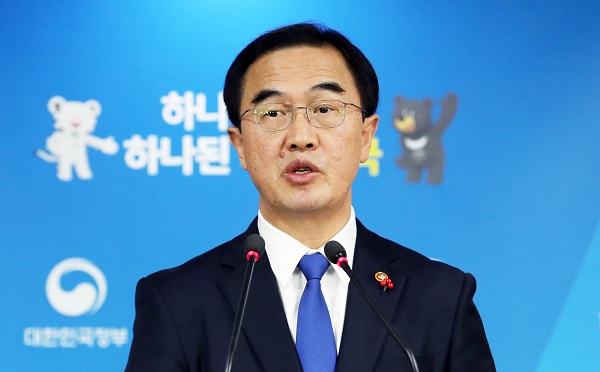 During a press briefing on Tuesday, Unification Minister Cho Myoung-gyon announces that Seoul is proposing high-level talks with Pyongyang next Tuesday on South Korea’s side of the Joint Security Area to discuss North Korea’s participation in the upcoming PyeongChang Winter Olympics. [YONHAP]

Seoul proposed high-level talks with Pyongyang next Tuesday on South Korea’s side of the Joint Security Area to discuss North Korea’s participation in the upcoming PyeongChang Winter Olympics.

The proposal, relayed by Unification Minister Cho Myoung-gyon on Tuesday during a press briefing in the Government Complex in central Seoul, came a day after the regime’s leader, Kim Jong-un, said in a New Year’s address he was willing to send a North Korean delegation to the Games, while adding both Koreas “could urgently meet” to discuss the matter.

Kim’s address was the first response to Seoul’s repeated invitations to join the Olympics, set to kick off on Feb. 9 in South Korea’s northeastern towns of Pyeongchang, Gangneung and Jeongseon in Gangwon, just several miles from the heavily fortified inter-Korean border.

It was also the first time the North was positive about talks with the Moon administration.

Cho suggested the two sides meet in the Peace House, but added the South Korean government would “positively” review any other time, place or format Pyongyang had in mind. The main agenda for the first talks between the two governments would be North Korea’s participation in the PyeongChang Olympics, said Cho, although Seoul would like to discuss other issues of mutual interest.

Asked by a reporter whether that includes North Korea’s denuclearization, Cho only said Seoul would “try to convey what it needs to.”