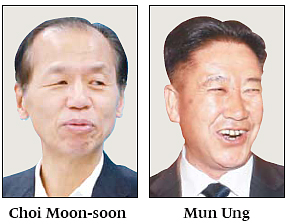 According to the sources, the Ministry of Unification and National Intelligence Service contacted the North to ask it to participate in the Olympics in February.

Gangwon Governor Choi Moon-soon and Kim Kyung-sung, head of the South-North Sports Exchange Association, met with Mun Ung, a vice-minister-level official who headed the North Korean youth football team, on the sidelines of an international football competition in Kunming, southern China, on Dec. 18, 2017.

Their meeting lasted for about two hours.

According to the sources, Choi offered to send a cruise ship to the Port of Wonsan to transport the North’s athletes, cheerleaders and senior delegates.

Choi is an enthusiastic advocate for the PyeongChang Winter Olympics, which are taking place in his province.

Choi also agreed to sports exchanges with the North. The South’s Gangwon FC and the North’s April 25 Sports Club will hold a football match in Kunming, China, on Jan. 15. Their next match will take place in Pyongyang in June and in Gangwon in October.

Reps. Kim Jin-pyo and Park Jeung of the Democratic Party and Ryu Seung-min, a member of the International Olympic Committee (IOC) from Korea, had a luncheon with Mun and other North Korean officials on Dec. 21, sources said.

The Blue House and Unification Ministry both said Tuesday that they were aware of Choi’s contact with the North.

“I am not sure whether he received an order from the Blue House to make the request to the North,” said a senior government official. “But as Gangwon governor, he knows the government’s position very well that the North’s participation is important and he talked about it during the meeting.”

The official also said Choi had informed the Unification Ministry before the contact and gave a debriefing later.

A Blue House official confirmed that it was aware of Choi’s contact with the North Korean official.

Choi said Tuesday that he will make all necessary preparations for the North’s participation. “On the assumption that the North will attend, I will make flawless preparations for lodging, transportation, safety and event operations to accommodate them,” he said.

Choi said further discussions will take place in Kunming when the two Koreas will have a friendly football match.

Choi told CBS radio on Tuesday he is confident about the North’s participation. “I see a 100-percent possibility,” he said. “Although we still need to hold discussions to decide specifics, I think Kim’s message was the strongest expression of an enthusiastic intention.”