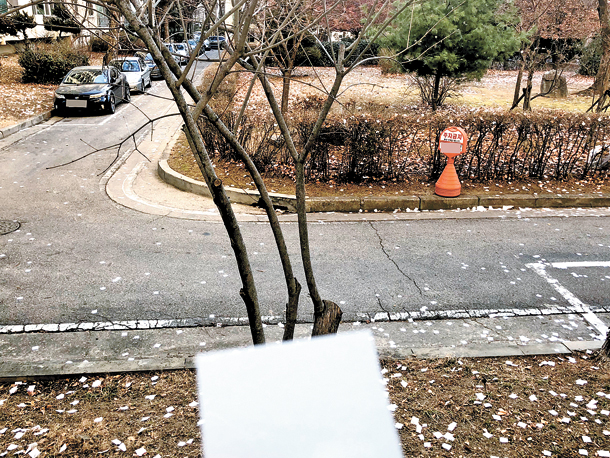 White paper squares thrown from the top of the Lotte World Tower in Songpa District, southern Seoul, in an effect that was supposed to look like snow at the end of a fireworks show on New Year’s Eve, remain scattered on the grounds of an apartment complex in Songpa on Tuesday. [YONHAP]

The celebration of the New Year at the Lotte World Tower in southern Seoul left behind drifts of confetti on roads and gardens of apartment complexes in the area, which were followed by waves of complaints.

The Lotte World Tower in Songpa District, southern Seoul, on Dec. 31 welcomed the New Year at midnight with 13,000 fireworks that lasted 555 seconds, symbolizing the tower’s height of 555 meters.

At the end of that show, large quantities of paper squares were thrown from the top of the tower in an effect that was supposed to look like snow. The squares were about an inch in size, larger than normal confetti.

Lotte Property & Development, which ran the show, said they were specially designed to dissolve on contact with water. Lotte World Tower is located next to Seokchon Lake.

But not all of the pieces landed in the lake. Many fell on gardens, trees and roads of apartment complexes around the tower. Some were even reported to have reached Hanam, Gyeonggi, some 15 kilometers (9.3 miles) away.

Some residents complained the pieces of paper were sticking around longer than they wished.

“I left home around 7:30 a.m. today and I saw those pieces of paper still lying around the apartment complex grounds,” said an office worker surnamed Cho on Tuesday.

“It just ruined my morning,” Cho continued. “I can’t believe that the company would execute an event like this without a cleanup plan.”

“Even if you spray water on them, it just creates a muck of paper pieces,” wrote a user on Instagram on Tuesday. “Even if it rains a ton in the near future, there will probably be a mess on the ground. I wonder if Lotte really didn’t know that the pieces would fly all over the place and not just land in the lake.”

In photos uploaded by some residents on social media, the white pieces of paper were seen stuck on bushes and scattered through gardens in front of apartments.

“We have some 50 people cleaning up the area from 8 a.m. today,” said Choi Young, the marketing team director of Lotte Property & Development. “The paper dissolves in water so there will be no environmental consequences.”

“The pieces were found mostly in Songpa-dong, near the lake, and Seokchon-dong,” said Lee Sang-pil, head of the tourism department of Songpa District Office. “With the cold weather, we cannot spray water on the roads to try to clean them up. We’ll try to sweep them away as soon as we can.”