Mountain fire rages over a night

Mountain fire rages over a night 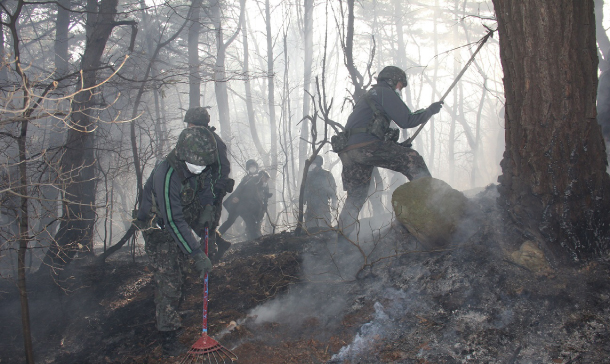 Soldiers from the Army’s 53rd Infantry Division battle a forest fire Tuesday on Mount Samgak in Gijang County, Busan. The fire, first reported on Monday at 9:46 p.m., raged for over 17 hours. [YONHAP]

A forest fire on a Busan mountain that started Monday night is believed to have caused 50 hectares (123 acres) of damage before firefighters got control of the flames early Tuesday afternoon.

No casualties were reported.

On Monday at 9:46 p.m., the Busan fire department received a call about a fire on Mount Samgak in Gijang County. The fire started near the top of the mountain, which is 469 meters (1,538.71 feet) above sea level, and spread down quickly.

Although firefighters were dispatched immediately, the darkness and rough terrain made it difficult for them to reach the fire before 11 p.m. They focused on containing the flames until daybreak by dousing them with buckets of water carried on their backs. The dry and windy weather conditions hindered progress.

By 7 a.m. Tuesday morning, it was light enough for helicopters from the fire department and the Korea Forest Service to join firefighters in battling the fire. Aerial firefighting helped subdue the flames quickly, extinguishing most by 2 p.m. In total, over 2,500 personnel, including firefighters, Gijang County officials, soldiers and police, took part in the operation.

The fire is believed to have damaged almost 50 hectares of the forest, which would make it the second-most destructive fire in Busan in the last decade. The worst was on Mount Bobae in 2011. Though Gijang officials did not advise evacuation from nearby residential areas, the closest of which were 3 kilometers (1.86 miles) from the mountain, they did issue “Dryness Advisory” emergency alert messages to warn residents shortly after being alerted of the fire.

Police, yet to identify the cause of the fire, are leaving open the possibility of arson or hiker negligence. As security cameras are only placed at the entrance to the mountain, an investigation will be difficult without concrete evidence or eyewitness testimony. “Because Mount Samgak doesn’t have a proper hiking path due to its steep terrain,” one Gijang County official explained, “people rarely hike there at night.”

Some have come up with the hypothesis that the fire may have been started by someone who went to pray on the mountain Monday night, when the full moon was up.

After bringing the fire under control Tuesday afternoon, fire authorities concentrated on extinguishing small, peripheral blazes before night set in on Tuesday. Some 20 percent of the flames continued to burn on as of press time Tuesday at 5 p.m.