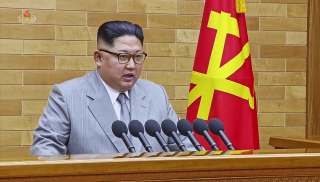 The U.S. media concluded there was only one winner in the high-profile geopolitical standoff and fiery war of words between U.S. President Donald Trump and North Korean dictator Kim Jong-un last year. “No question, Kim Jong-un won 2017,” one expert said. I do not agree. Through repeated miscalculations, Kim has pushed his regime and country into a dead-end. The new year will be equally tough for North Koreans.

When they prepared their fourth nuclear test two years ago, Kim and his aides may have thought that Washington would never come up with sanctions powerful enough to deter their nuclear and missile programs. They would have firmly believed Beijing would never go along with such sanctions and their economy wouldn’t be affected much. That turned out to be wrong. First, Trump doggedly pursued one set of sanctions after another. He provoked and stung Kim through a Twitter offensive. Second, Beijing complied with UN Security Council sanctions. North Korean exports to China in 2017 are estimated to have shrunk by more than a third from a year earlier. This year, shipments to China could plunge by more than 90 percent. Kim has lost the only stable and reliable market that generates hard currency for his regime.

The third miscalculation derives from Kim’s failure to see how susceptible to trade sanctions the North Korean economy has become. The Pyongyang regime has little knowledge of the realities of economics due to a lack of basic scientific methodology to track national income and economic data. It underestimated the power of international sanctions. Obviously pained by the rounds of sanctions, Kim mentioned the need for self-sufficiency and sovereignty 11 times during his New Year’s address.

Kim’s Achilles’ heel is economics. He knows his power will be safe if the economy runs well. But the economy cannot flourish if it is under strict controls. The market will expand when controls are eased. But his dictatorship would be weakened. If a market economy is systematized, the economy is bound to thrive. But Kim would have to compromise his absolute power. North Koreans are not as naïve as in the past. They have tasted the fruits of capitalism through greater freedom of transport, trade and communications. Kim deeply bowed to the people during the televised address. But his show of humility won’t win over the hearts of hungry people. Time is not on his side.

Developing the economy could be harder than advancing nuclear weapons. Kim mentioned the word “nuclear” 42 times in the seven New Year’s addresses he delivered since becoming ruler. The word “economy” was mentioned 120 times. Economics is that important. Even after Kim masters nuclear weapons, he faces the choice of opening up as China’s Deng Xiaoping did, or clinging to an iron grip on the nation like Romanian strongman Nicolae Ceausescu. If Kim chooses Deng’s way, he must give up nuclear weapons and missiles.

South Korea is also up against a tough year in 2018. Some are already hopeful that Pyongyang will come to the negotiating table. In his New Year’s address, Kim suggested inter-Korean talks to send North Korean participants in the PyeongChang Winter Olympics in February. Even if Washington and Pyongyang sit across from one another, they won’t likely easily reach any settlement. Out of fury, Kim could go further in his provocations and stoke a war. What should be our strategy?

First of all, we must be cool-headed and see through Pyongyang’s real intentions and weaknesses. We can meet with Pyongyang officials over the sports event in February. But if we think the Olympics can lead to a breakthrough in the nuclear problem, that’s like believing that a tail can wag the dog. Any move that undermines international sanctions would only complicate the problem. Rescuing Kim from his economic dilemma at the current stage could deepen confrontation between Washington and Pyongyang. We can overcome the nuclear crisis only when sanctions and pressure are continued.

Third, the government must not wrangle over ideological issues on the security front. There can be no liberals or conservatives in the face of a war threat. A country is doomed if it is divided. President Moon Jae-in is not a leader of liberals alone, but of the entire free and democratic Republic of Korea.