Productivity shifts from city to country

Productivity shifts from city to country 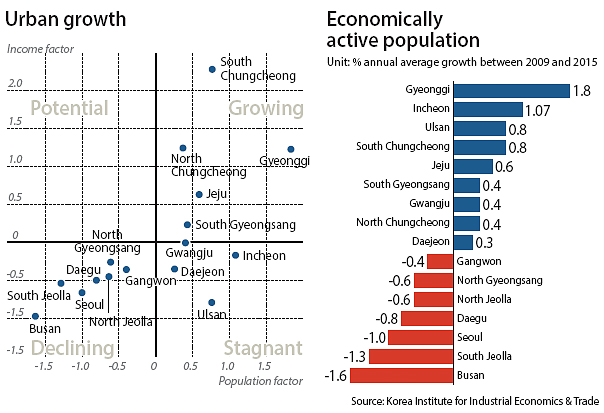 Seoul, Busan and Daegu have traditionally been Korea’s leading cities, with their dense population, vibrant culture and relatively high income compared to other cities and provinces.

But there are signs that these urban centers are declining at an alarming speed, largely due to an aging population, dwindling income base and manufacturing jobs relocating to the suburbs.

The trend was evident in the Korea Institute for Industrial Economics and Trade’s analysis of regional growth between 1990 and 2015. The study examined population growth and income growth in the country’s major cities and provinces. A rise in both suggested the region had potential for further development, while a decline in both portended the opposite.

One of the most noticeable changes in the past two and a half decades is how Korea’s major cities are either stagnant or heading toward irrelevance.

Between 1990 and 1997, Seoul’s rising population and income indicated high potential for growth. But following the Asian financial crisis, the capital experienced a rapid decline from which it never recovered. Income and population growth after the global financial crisis of 2008 was well below the nation’s average, just as it was between 1998 and 2008.

The decline can be attributed to the large migration of Seoulites to neighboring Gyeonggi and Chungcheong provinces as industrial complexes were being built outside the nation’s capital and government agencies moved their offices to the Chungcheong region, including the city of Sejong.

Traditionally large cities like Busan and Daegu suffered a similar fate. Busan, especially, saw a significant decline between 2009 and 2015 in both its income and economically active population between the ages of 15 and 64. Daegu, too, had one of the lowest income and population growth figures.

Among the country’s seven biggest cities, Busan had the largest percentage of people over the age of 64, at 15.5 percent of residents. It is now the fastest-aging city in the country.

Children 14 years of age and younger account for 11.5 percent of Busan’s population, below the national average of 13.6 percent. Seoul’s youth population is at a similar level, 11.9 percent.

Where have all the children gone? To Sejong, where the government has been building new schools and where kids now account for 18.2 percent of all residents.

Even Daejeon, a city that billed itself as a tech hub for research and development, has seen stagnant growth. Between 2000 and 2002, it was one of the fastest-growing areas in the country, but since then, it has been in limbo.

Ulsan, the powerhouse of Korea’s shipbuilding and shipping industries, experienced a significant drop in income growth due to a global downturn in logistics prompted by the 2008 financial crisis.

“One could attribute the decline of major cities to Baumol’s cost disease,” said Hur Moon-koo, a senior analyst at the Korea Institute for Industrial Economics and Trade, “so it’s a natural transformation.”

The American economist William Baumol theorized that rising productivity in sectors like manufacturing pushed up wages in other sectors like services. It explains why salaries continue to go up even in regions and industries that are not as productive.

“The problem, though,” Hur said, “is that the speed at which Korean cities are declining is too rapid.”

He said these cities need to find ways to create new industries by combining manufacturing and services, noting that the economies of Busan and Daegu appear to be highly dependent on service industries like restaurants and lodging. On the other hand, Gyeonggi, North and South Chungcheong, South Gyeongsang and Jeju have seen their economies grow. Other than Jeju, which has a booming tourism industry, these areas are primarily manufacturers.

“In order to secure future growth engines, the regions have to find programs that can connect education and jobs to help young people settle,” Hur said. “While it will be difficult for South Jeolla and North Gyeongsang, whose economies are dependent on agriculture and fishing, they need to find an alternative and diverse workforce, such as foreigners, to fill the needed labor.”