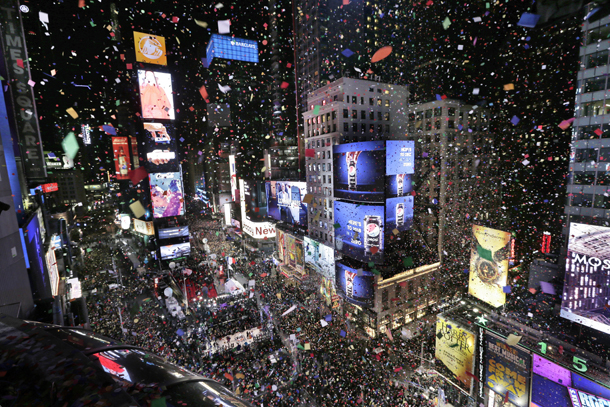 People welcome the new year in Times Square, not far from many theaters that saw record-breaking sales during the final weeks of 2017. [AP]

NEW YORK - The year on Broadway came to a very sparkly end for theater producers as many shows recorded their most profitable weeks ever despite theatergoers facing bitter cold and some eye-popping ticket prices.

Ten shows last week earned more than $2 million, led by “Hamilton,” “The Lion King” and “Wicked,” which each pulled in more than $3 million, according to the Broadway League, a national trade association for the industry. The year ended with grosses soaring to $1.6 billion, attracting 13.74 million patrons, both yearly records.

New weekly highs were reached by shows including “Come From Away,” “SpongeBob SquarePants,” “Charlie and the Chocolate Factory,” “The Play That Goes Wrong,” “Waitress” and “The Band’s Visit.” Even the musical “Chicago” got into the act, earning a record $1.3 million.

Those who boasted surpassing the $2 million mark included “The Phantom of the Opera,” “Hello, Dolly!” “Dear Evan Hansen,” “Charlie and the Chocolate Factory,” “Aladdin,” “Springsteen on Broadway” and “The Book of Mormon.”

The time around Christmas and New Year’s is usually Broadway’s boom time, but this holiday season was particularly flush, pushed by premium pricing and several shows going from eight performances a week to nine. The average price for a seat at “Hamilton” was $358, while it was $508 to hear Bruce Springsteen. The official top premium price to see Bette Midler in “Hello, Dolly!” was $996.

Not every show was popping Champagne. The holiday revue “Home for the Holidays,” which featured the winners of various TV singing competitions, ended its run as one of the poorest performing shows ever on Broadway. It crept out of town with a weekly haul of under $80,000 over eight performances, or 5 percent of its potential gross. The average ticket was just $26, but the theater was 70 percent empty.

The data this year is based on a 53-week calendar year, which is periodically necessary so 365-day years can be lined up with 52-week-long sales windows measured Monday through Sunday.