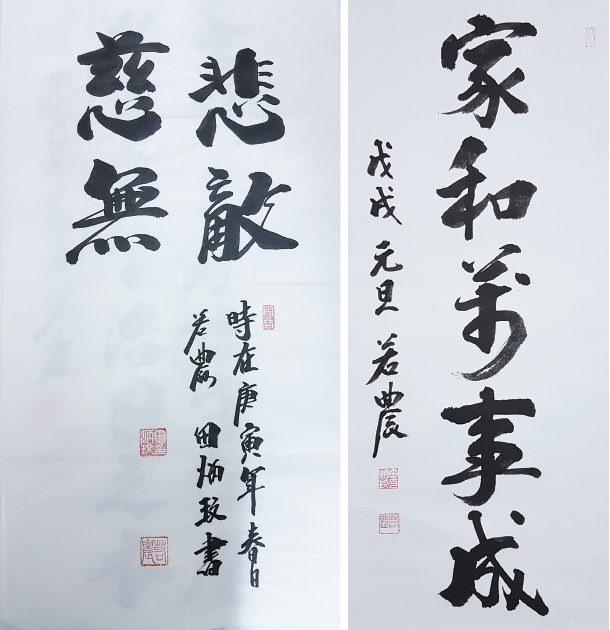 Two family mottos written by calligrapher Jeon Byeong-mun, who has volunteered to write family mottos for free over the past 20 years. The left one reads jabimuseok, which means, “If You Are Kind, There Are No Enemies.” The right one reads gahwamansaseong, which means “A Happy Family Makes Everything Go Well.” [PARK MIN-JE]

Writing a family motto on a piece of paper has long been considered old-fashioned, but some people are making it trendy again.

Those getting tired of the fast-paced digital world are showing interest in what was popular before the internet era, and set out to write a family motto to hang at home. The popularity of calligraphy in recent years has brought attention to the ways people can incorporate words into their daily lives.

Recently, over 50,000 people gathered at a free event organized by the Korea Artistic Academy to get their family motto written for them.

“It feels like a lot more people want to have a family motto [written] than last year,” said an official affiliated with the academy.

“There used to be no line at this event, but for the new year, there was a wait for up to 20 to 30 minutes. The calligraphers haven’t even taken a rest, but [there still is a line.]”

Experts say that family mottos have evolved from what they used to be, which were usually lessons from the family’s elders.

Known as gahun in Korean, family mottos are defined in the dictionary as a lesson given to younger generations from the head of the family. Some families have had gahun handed down generation after generation, and many have hung the words on their walls for multiple decades.

However, as families have gotten smaller over the years, having the family motto disappeared from homes. 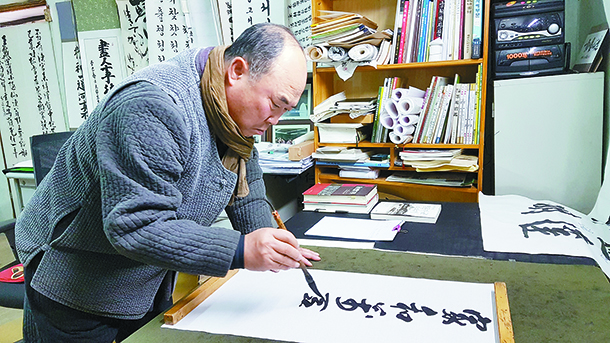 “Having a family motto did not fit the current [generation], which values [privacy], so it disappeared,” said Gu Jeong-wu, a social studies professor at Sungkyunkwan University.

“However, young people now see it as something that all family members can decide together and try to keep, rather than a motto decided by elders.”

In fact, many families have gotten quite creative with their mottos. Calligrapher Jeong Byeong-mun, who has been volunteering to write family mottos for the past 20 years, said what people want for their family mottos has changed a lot over the years, as in the past, people preferred to have Chinese sayings from the Myeongsimbogam, a book that listed proper decorum and discipline from the Joseon Dynasty (1392-1910).

“However, [more recently,] people have chosen Korean sayings or sentences that could reflect their daily lives,” said Jeon.

Trendy sayings are also more commonly being used as family mottos. After comedian Kim Saeng-min’s program where Kim reviews whether certain spending habits are “necessary” or “stupid,” many of the words he has said on the program have made it to some families’ mottos.

“‘Money isn’t there to spend’ is one of the most popular family mottos I was asked to write recently,” said Jo Cheol-hee, a director general for Hongik Calligraphy Education Center. “It seems popular, as many people agree with the saying.”

People in different age groups have shown that they prefer different mottos. Newlyweds go for “Do Your Best” or “Live Honestly” while those in their 40s and 50s look for old Chinese sayings, like the one that translates to “Do What You Can Do as Humans, and Then Wait for the Signal.”

Jeon has many samples that he can show to his guests, but these days most people come with a saying already in mind.

The best family mottos, experts say, are things that all family members can sympathize with. Lee Sang-mun, who is part of a group that promotes family mottos, said that people should go for something practical.

“Instead of having a sentence saying something abstract, it is better to set a saying that reveals the direction one or the family has,” said Lee.

“Also, something simple is better than something long.”

Some experts also say that having a family motto provides a type of mental comfort. Psychologist Lee Na-mi said having a family photo written and hung on the wall ensures family members see the motto frequently, and they store the idea in their brain.

“Subconsciously, people will [change] their behavior to fit to the motto,” said Lee. “Also, this means that there is one more thing family members share, and that could create security and comfort.”